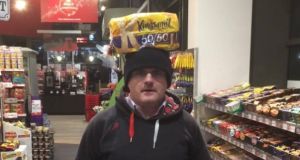 Friday was the 42nd anniversary of the IRA stopping a minibus at Kingsmill, Co Armagh and shooting 10 Protestant workmen dead and seriously injuring another. The Catholic worker among the group was spared.

Mr McElduff posted the short clip of himself in a shop balancing a loaf of Kingsmill bread on his head on the anniversary.

In the clip, the West Tyrone MP says: “I’m just wondering - where does McCullagh’s keep the bread?”

Mr McElduff deleted the video and posted an apology after his actions were condemned as insensitive.

Sinn Féin issued a statement in which Mr McElduff said: “When I posted the video I had not realised or imagined for a second that there was any possible link between the brand name of the bread and the Kingsmill anniversary.

“It was never my intention to hurt or cause offence to anyone and in particular to victims of the conflict who have suffered so grievously.

“I apologise unreservedly for the hurt and pain this post has caused.”

UUP Cllr Chris Smyth said he would be reporting the incident to the police and the Westminster standards committee.

Alliance leader Naomi Long told The Irish Times that Mr McElduff should resign “unless he can provide a reasonable explanation” as to why he posted the video.

“I mean this man is elected to parliament. Apart from the fact of whether it was offensive, it was ridiculous,” she said.

Ms Long said it if was a deliberate act Mr McElduff needs to resign and it if was a “genuine stupid accident” then Sinn Féin need to ask wider questions about his social media use.

“Kingsmill victims were shot by the IRA after being asked their religion. Shame on any elected rep who posted that inhuman video. I feel sorry for IRA victims & West Tyrone who have McElduff as their MP. All murder was wrong. Glorifying any murderer is sickening,” she said in a Twitter post.

Mr McElduff, who two years ago did a stand-up routine at a comedy club in Omagh, is known for posting social media clips featuring attempts at humour. One of these involved him in the halls of Stormont searching for a Snickers chocolate bar and another where he put a shoe in a pothole to demonstrate its size.

DUP MLA William Irwin said Sinn Féin’s leadership must give an explanation as to why the MP would post “such a bizarre video”.

“Was it tomfoolery or a blatant insult to innocent victims? The timing and brand of bread raises many questions about the motivation behind this video.”

UUP Councillor David Taylor said Mr McElduff “should be truly ashamed of himself for his actions”.

TUV leader Jim Allister said the posting of what he described as the “sick video” was “tasteless beyond belief”.

Responding to the post, the PSNI’s Supt Emma Bond said: “Police have received a number of reports of a post on a social-media platform, made by a local public representative. Enquiries are ongoing.”