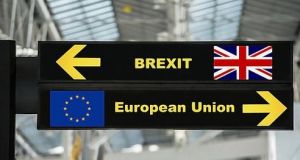 Jim O’Callaghan said several non-EU countries were parties to the Dublin III convention, and he hoped Britain remained in it following Brexit.

If Britain leaves the European Union’s convention governing asylum seekers after Brexit it will have very significant consequences for Ireland, Fianna Fáil’s spokesman on justice Jim O’Callaghan has warned.

The Dublin III Regulation provides that a person seeking asylum in the EU must apply in their state of arrival in the the union.

Mr O’Callaghan said that if Britain left the convention after Brexit it would create difficulties for Ireland.

“It would be a huge benefit to us if Britain were to remain part of Dublin III. If not, a person could seek asylum in the UK . . . and having failed to get it, come to Ireland and start the process.

“The convention was designed to prevent people from cherry-picking which country they wished to apply in. If Britain were to leave it would be counterproductive.”

He said several non-EU countries, including Norway, Switzerland and Iceland, were parties to the Dublin III convention, and he hoped Britain remained.

Fine Gael TD Alan Farrell was also of the opinion that this would become an issue after Brexit, but said he believed it would apply to a diminishing number of people as Britain tightened up on immigration.

“It’s a very serious issue. We do not have the equivalent of M15 in this country. An Garda Síochána is primarily responsible for intelligence. My view is that the service is not up to standard,” she said.

Ms Chambers said there was another issue surrounding the new Garda Commissioner that was potentially unsettling. If a non-Irish citizen was appointed, that person would also be responsible for the State’s intelligence services. This would not be appropriate or acceptable, she said.

We need a reorientation of [intelligence services] and need to find the correct person to set it up and to run it,” she said.

That view was shared by Independent senator Gerard Craughwell, who said the Garda, the Defence Forces and the Department of Social Welfare all had intelligence operations but there was inadequate co-ordination.

“We need a director of intelligence with responsibilities comparable to those of the directors at MI5 or the CIA.”

The Department of Justice, in response to a query from The Irish Times, contended the current intelligence service was effective and efficient and played down the prospect of a new agency, while accepting the landscape was evolving.

A spokesman said: “It should be noted that our history on this island means that, regrettably, we have been engaged in counterterrorism work for decades, and the arrangements currently in place have served the Irish people well in countering threats to the security of the State.

“The Garda and Defence Forces have a long and proud record in protecting and defending the State from a sustained terrorist threat over many years.

“That said, given the dynamic and evolving nature of security threats, particularly from international terrorism, these arrangements are kept constantly under review, including the decision-making arrangements across the common areas of the State’s security and defence.”

Cash haul of €700,000 linked to veteran trafficker Mitchell 13:26
Sil Fox tells of ‘months of hell’ as he is cleared of sex assault on woman in bar 13:17
O’Doherty and Waters to appeal court’s dismissal of legal action 13:13
Got a moment? Help research into life under Covid-19 restrictions 12:58
More than 1,500 scientists issue funding warning and call for department for higher education and research 12:50