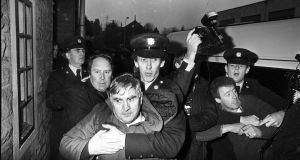 Apart from the running catalogue of terrorist and related events in Northern Ireland, the single most contentious issue in Anglo-Irish relations for much of the 1980s was extradition.

For many years, Irish courts accepted, without significant demur, a defendant’s claim of political motivation as a catch-all get-out clause to avoid extradition for what, in most other jurisdictions, would be seen simply as acts of extreme violence without extenuating justification.

The Cosgrave government’s Criminal Law Jurisdiction Act of 1976, under which a person accused of certain offences in one jurisdiction (eg Northern Ireland) could be tried in the other (ie the Republic and visa versa), attempted to circumvent the problem but with limited success.

As part of what flowed from the Anglo-Irish Agreement of 1985, the Irish government was expected to ratify fully the European Convention on the Suppression of Terrorism by bringing in the Extradition (Amendment) Act in 1987 by December 1st.

The new Act proposed to make hijacking a plane, kidnapping, killing by bombing or the use of automatic weapons, and murdering a diplomat or high official, crimes that were immune to the claim that the alleged perpetrator was politically motivated and therefore could not be extradited to the country wishing to try them.

As the clock ticked down to the December 1st deadline, and the government came under pressure from elements within Fianna Fáil and from others, in Ireland and abroad, many of them supporters of Sinn Féin and the IRA, by early November, it was clear the government wished to defer taking a decision.

Among State papers published by the National Archives under the 30-year rule, a November 3rd outline timetable, charting how the immediate aftermath of a delay might be handled, was written by the secretary of the Department of Foreign Affairs Noel Dorr, and sent to Dermot Nally, government secretary, marked “secret”.

Dorr begins by stating “we are, as you know, under instructions to take it virtually certain that the Extradition Bill will have to be deferred”.

Dorr goes on to outline how events might be managed, leading to the European Union summit in Copenhagen a month later, at which it was hoped the taoiseach, Charles Haughey, might have an opportunity to meet his UK counterpart, Margaret Thatcher.

On November 5th, Dorr noted a discussion with the British ambassador to Ireland, Nicholas Fenn, who said Thatcher’s view was that Britain had delivered on commitments, despite “a very rough time from Unionists”, and the Extradition Act “is now of major importance to them as evidence of commitment on the Irish side to the common fight against terrorism”.

Fenn believed, according to Dorr, that if there was a deferral “there could be very difficult times ahead (‘The lady has got her teeth into it’),” reported Dorr.

In parallel with laying the ground for delaying the implementation of the Act, the government was also seeking to fend off British objections to having it obligatory for the attorney general to give his “consent” to any extradition warrant approved by a UK court and the UK attorney general.

This opened the possibility, in British eyes, of their attorney and courts becoming “judiciable”, that is open to scrutiny and judgment, by the Irish courts.

However, two events, the seizing by the French authorities of the IRA arms ship, the Eksund, on November 1st and the Enniskillen IRA bombing atrocity on November 8th, exerted a powerful impact on the discussions.

As to Enniskillen, if it wasn’t obvious immediately, SDLP leader John Hume telephoned Haughey’s secretary, Dermot Gallagher, on November 10th and told him “nobody [in London] would now understand if we did not go ahead with the Extradition Act”.

Gallagher’s memo of the conversation, marked secret, continued: “He (Hume) now strongly believes that the ‘move has to come’. He added that, ‘if that does not happen, we can throw out our hat on everything’.”

By contrast, Dublin city councillors passed a motion declaring “no confidence in the system of criminal justice administration in the six counties and deplores the extradition of persons who are sought there for political offences”.

The motion was passed on November 6th, two days before the Enniskillen bombing, and sent to the taoiseach’s office on the 11th – Remembrance Day – where it was placed in the extradition file.

From November 18th to 27th, the file shows an intense level of engagement between the Irish and British sides.

A memo – marked secret and personal, and dated November 18th – written by Dermot Nally recounts verbatim a conversation between Haughey and Tom King, with the taoiseach declaring at the outset that “recent events” have enabled him change position and drop the planned deferral.

He defends the special role to be given in the Act to the attorney general.

“We have to do this,” says Haughey. “Unless we do, I cannot guarantee delivery. I have to think about my party on Wednesday: I am really worried about the outcome of that discussion. . . I would ask you, again, not to look a gift horse in the mouth. You will have extradition. . .”

King replies: “I am bound by our legal advice: they say it will be judiciable. They say the British attorney [general] will have to explain himself in Dublin courts – that would be an impossible position.”

“We are in deep trouble politically,” he maintained. “Our party headquarters say that things there are going berserk. I would like you to understand that this means for us an enormous political battle.”

And later in the conversation: “I cannot emphasise sufficiently how dodgy the whole thing is – even after Enniskillen.”

Unable to reach an agreed position, Haughey concluded by saying “I will have to do what I am proposing, anyway.”

A follow-up meeting between the taoiseach and the British ambassador on November 24th did not change the essentials. “I am going as far as I can politically,” said Haughey. “For me and this government it is a question of survival.”

The next day, he wrote in similar terms to Thatcher: “Our attorney general shall not give his consent to the endorsement of a warrant unless he is of opinion that there is a clear intention to prosecute founded on the existence of sufficient evidence.

On November 26th, King issued what Dermot Gallagher described as an “unhelpful press release”. In it, the Northern Ireland secretary said the British were “surprised” at the role being given to the attorney general, which they regretted and which was a cause of concern.

He wrote: “Your proposals would mean that uniquely in Europe, the UK will be the one country from which the Irish authorities are not prepared to accept warrants in good faith. I find it hard to reconcile this with our common endeavour to establish the closest possible trust and co-operation between us.”

But there would be no backing down.

Introducing the law personally in the Dáil for second stage reading on November 27th, Haughey said the role of the attorney general would apply in “each and every case” of extradition.