Leo Varadkar says: ‘I can assure you I’ll be around for as long as the people want me’ 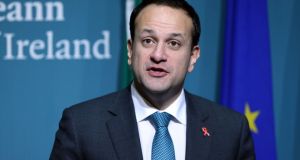 Taoiseach Leo Varadkar said he regrets comments he made in 2015 when he said he had an exit strategy from politics because he ‘definitely’ wanted to do something else. Photograph: Laura Hutton/PA Wire

Taoiseach Leo Varadkar has changed his plan to step down from politics by the time he’s 51, insisting he will be around for as long as he is wanted.

The Fine Gael leader, who spent some time as a GP before focusing on a full-time political career, said he regrets comments he made in 2015 when he said he had an exit strategy from politics because he “definitely” wanted to do something else.

“I don’t see myself in politics at 51. Whatever I do next it will be different, not politics,” the former social protection minister said at the time.

However, Mr Varadkar has now said that he is in politics for the long haul.

When asked if he still sees himself in politics when he is 50, he said: “I think I answered that question before and I regret answering the way I did because it was mistaken by some people as a lack of commitment to politics.

“I can absolutely guarantee you that I’m 100 per cent committed to this job, as Taoiseach, leading my party and doing everything I can for my constituency of Dublin West, so that’s my focus at the moment.”

The 38-year-old - who turns 39 in a few weeks - added: “I haven’t contemplated retirement from politics for a very long time and I can assure you I’ll be around for as long as the people want me.”

A busy year lies ahead for the Taoiseach with Phase 2 Brexit negotiations and renewed efforts to resolve the Northern Ireland political crisis.

If talks fail to restore powersharing at Stormont Mr Varadkar has vowed that the Irish Government will seek to have the British-Irish Intergovernmental Conference convened in the New Year.

There is also the question of whether he will call an early general election and if the Eighth Amendment will be repealed.