Minister’s foresees problems, asking: ‘How do you prove someone is 1.5 metres away?’ 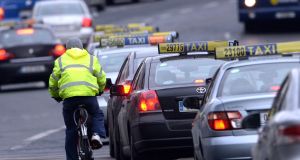 Such laws requiring a minimum distance have been passed in France, Belgium, Portugal, Canada and Australia as well as half of the states in the US. Photograph: Cyril Byrne

Minister for Transport Shane Ross has raised doubt over a proposed law to penalise drivers who pass cyclists too closely, indicating it may be unenforceable.

Under the proposed new legislation introduced by Minister for Social Protection Regina Doherty and Minister of State Ciarán Cannon, motorists would be obliged by law to pass cyclists no closer than 1.5 metres on roads with a speed limit of 50km/h or higher.

On roads where the speed limit is under 50km/h, the safe passing distance would be set at one metre.

However, speaking to The Irish Times, Mr Ross said there are a number of difficulties with the proposed legislation.

The Department of Transport is examining it very carefully but the practicalities of enforcement may prevent its passage.

“We are looking at it, it has difficulties. It was tried in Australia and elsewhere. The problem is proof, the problem is enforcement,” said Mr Ross.

“I do not want to introduce a measure that is basically unenforceable. How do you prove someone is 1.5 metres away? That is very hard to prove.”

Such laws have been passed in France, Belgium, Portugal, Canada and Australia as well as half of the states in the US.

The proposal from Ms Doherty and Mr Cannon carries a number of penalties for drivers if found to have breached the safe distance rules.

A motorist would face an €80 fine and have three penalty points added to their licence.

For cases that progress to the courts and where guilt is proven, the penalty increase to five penalty points and a fine of up to €1,500.

Fianna Fáil is to introduce a similar Bill in the Dáil this year, which will also seek to introduce a minimum passing distance between motorists and cyclists.

The party’s spokesman on transport Robert Troy said the legislation was required to protect cyclists.

“This is something we need to work on here. I have received widespread support from all political parties and I will be pushing this all the way.”

However, Mr Ross said his department was “sceptically” assessing the measure, alluding to a number of drawbacks.

The Minister added: “It is not ruled out but it is not as easy as it looks. If you put 1.5 metres between them all the time, you have got to be able to prove people have committed that offence.”

While the number of road deaths fell to their lowest level in 2017, there was a 50 per cent increase in deaths among pedal cyclists. Some 15 cyclists died in road traffic collisions last year.

Phil Skelton of the group “Stayin Alive at 1.5” has spearheaded the campaign for the introduction of a law requiring overtaking motorists to obey a 1.5 metre exclusion zone around cyclists.

Mr Skelton expressed disappointment at the comments of Mr Ross, who he said had pledged to research the situation in Queensland, Australia, after being told the safe-distance law had been introduced there.

“So if Mr Ross thinks there is not a solution to be got there, he has not done his research,” Mr Skelton added.

“Many motorists are simply not aware of the rights of bicycle riders and the challenges they face in navigating a road system designed primarily for motor vehicles, underpinning a stubborn prejudice that bicycle riders are ‘rogue’ road users.”

Mr Skelton said “hefty” penalty points and fines appeared to be the only way motorists would take seriously their obligations towards vulnerable road users such as cyclists.

While he said he was speaking without seeing the text of Mr Ross’s comments he said it would be very regrettable not to proceed with such a move.

Dr Mike McKillen, who is part of the Dublin Cycling Campaign and the advocacy group cyclist.ie, said the 1.5 metre protection for cyclists could be made much more enforceable “if we have a speed limit in all urban areas of 30 km/hour”.

The introduction of the safe passing distance has been called for after a boom in cycling for over a decade, with figures showing more cyclists than ever commuted in Dublin last year.

Mr Ross insisted he was willing to support any measure that helped save lives on Irish roads.