Varadkar will not seek Trump’s help over North stalemate 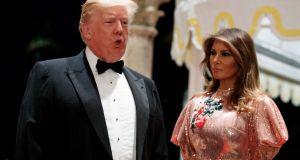 US president Donald Trump and his wife, Melania, after arriving for a New Year’s Eve gala at his Mar-a-Lago resort, Palm Beach, Florida, on Sunday. Photograph: Evan Vucci/AP

Taoiseach Leo Varadkar will not be seeking the assistance of US president Donald Trump to help end the ongoing political stalemate in Northern Ireland.

Mr Varadkar was questioned by reporters about Mr Trump’s book The Art of the Deal and whether the president’s role as a businessman could be put to use in Northern Ireland.

Responding Mr Varadkar said: “I have read The Art of the Deal and the basic concept behind that is a good deal is when I win and you lose.

“That’s not the kind of deal that is going to work in Northern Ireland. So while President Trump has many enormous talents and abilities, I don’t think bringing about peace in Northern Ireland would be his skill set. But certainly we are always open to assistance from the US.”

The Art of the Deal was first published in 1987 and detailed Mr Trump’s tips in securing deals. Its publication helped make Mr Trump a household name in the US.

For almost a year since the resignation of the late deputy first minister, Martin McGuinness, Northern Ireland has been without a functioning powersharing administration.

Fresh discussions are to begin between Sinn Féin and the Democratic Unionist Party in the coming weeks in a bid to restore the executive.

Mr Varadkar also told reporters he aspires to see a united Ireland but only on the basis of consent and cross-community support.

He added: “And that is the way I would envision it. I very much follow the school of thought of the great John Hume who talked less about a United Ireland and more about an agreed Ireland. And a set of relationships that we can all be happy with. That is the way it should be.”

The Taoiseach and Tánaiste Simon Coveney have previously spoken of their desire to see a united Ireland in their lifetime.

Such comments angered the leadership of the DUP, including Arlene Foster who suggested the Government was using Brexit to promote the idea of a united Ireland.