Abortion referendum will not be delayed, says Harris 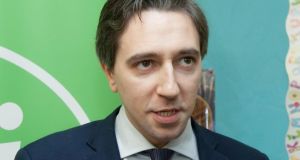 Minister for Health Simon Harris: ‘I am working to make sure that the Government would be ready to hold a referendum in the summer.’ Photograph: Gareth Chaney/Collins

The Minister for Health has insisted the Government is committed to holding a referendum on the Eighth Amendment to the Constitution this summer.

Simon Harris denied weekend newspaper reports that the vote would be delayed until October, due to the tight timeframe facing the Government.

Speaking to The Irish Times, Mr Harris said Taoiseach Leo Varadkar had made it clear his preference was for a referendum in May or June and this was the only timeframe he was working towards.

“There are still a number of decisions to be taken by the Government. I expect the Cabinet will discuss this in depth at its meeting next week, as will political parties.

“From a process point of view, I am working to make sure that the Government would be ready to hold a referendum in the summer.”

The Oireachtas committee examining the Eighth Amendment completed its work in December and its recommendations were forwarded to the Oireachtas on December 20th.

The Cabinet will discuss the matter at length at its first meeting of the year, on January 10th, ahead of a Fine Gael parliamentary party meeting on January 15th. The Dáil will also debate the committee’s report for three days when it resumes later this month.

In order for the Government to meet its commitment to have a referendum in the summer, the latest date it can publish a referendum Bill, which essentially allows for a vote to take place, is February 14th.

There are also expectations it will produce at the same time a clear outline of the legislation that would be introduced if the the Eighth Amendment, which gives effect to the State’s abortion ban, was removed.

Mr Harris said he understood this was a tight time frame, but he insisted he was committed to the dates outlined by the Taoiseach.

The Minister is one of six Cabinet Ministers to support removing article 40.3.3, which gives the unborn and the mother an equal right to life, from the Constitution and allowing terminations up to 12 weeks.

Minister for Transport Shane Ross and Minister of State at the Department of Health Finian McGrath support repealing the Eighth Amendment but have not stated whether they support abortions up to 12 weeks.

Taoiseach Leo Varadkar has said Ministers and Ministers of State will have a free vote on the referendum Bill but is eager for the Cabinet to remain united on this issue.

A number of Ministers have not spoken on the issue, insisting they will make their positions known in the coming weeks.