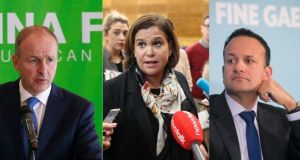 Sinn Féin has surged ahead of Fine Gael and is tying with Fianna Fáil for the highest vote among political parties, according to the latest opinion poll published on Sunday.

The Business Post/Red C poll puts Sinn Féin at 24 per cent, up 3 per cent on the previous survey by the same pollsters a week earlier.

In the space of the two surveys, Fine Gael is down 9 per cent and Sinn Féin up 11 per cent, confirming a trend in other polls.

In the Irish Times/Ipsos MRBI poll published at the beginning of last week, Sinn Féin increased by seven points, from 14 per cent to 21, while Fine Gael were down 6 per cent to 23 per cent.

There was little change among other parties in the Sunday Business Post/Red C poll.

On Saturday, Taoiseach Leo Varadkar claimed Fianna Fáil could not be trusted to keep Sinn Féin out of government, as the three leading parties continued to spar over possible coalition options.

Mr Varadkar said: “The Fine Gael position on this is absolutely unequivocal – we won’t consider a coalition with Sinn Féin after the election and that’s down to their policies – the fact that they are soft on crime and high on tax.

“They opposed the Special Criminal Court and they want to impose €4 billion extra taxes on Irish businesses, on people’s pensions, on property and wealth all of which would cost us jobs and cause wealth to leave the country.”

However, “ I don’t trust Fianna Fáil because quite a lot of their candidates have said that they would be open to coalition to Sinn Féin – Pat ‘the Cope’ Gallagher, Darragh O’Brien, John McGuinness, Kevin O’Keeffe and Mary Butler.”

Fianna Fáil leader Micheál Martin in return said that Fine Gael TDs such as Regina Doherty, Jim Daly and Kate O’Connell had all expressed positive views on Sinn Féin and it was not unusual to have differing views within parties.

“The Taoiseach is on this message but judge me by my actions in 2016 – I could have engaged with Sinn Féin after that election, I could have but I didn’t engage with them.

“In all parties, people will have views in this because we are not monoliths but he is underestimating the depth of resistance at all levels, membership, those who vote for us and TDs who will have no truck with Sinn Féin.

“We will not go into government with Sinn Féin because of how they continue to endorse the past and try and shove it down people’s throats as a correct, just war which killed innocent people.”

Mr Martin said Fianna Fáil was also opposed to going into coalition with Sinn Féin because of the party’s policies on company taxation which he believed would stymie rather than encourage enterprise.

Sinn Féin leader Mary Lou McDonald earlier described the attitude of both Fine Gael and Fianna Fáil as “very childish”. She also labelled as “silly” a Fine Gael video tweeted by the Taoiseach in which senior Fine Gael politicians ruled out a coalition with Sinn Féin.

Focus group research carried out by Ipsos/MRBI for The Irish Times on Saturday shows undecided voters are overwhelmingly in favour of change in next week’s general election.