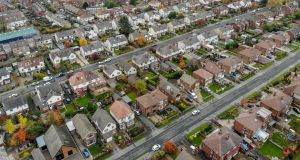 ‘All parties will see the demand for change and more investment – to combat the housing crisis, congestion, long commutes and overcrowded emergency departments.’

It made sense that the 2016 general election was driven by the ongoing hurt over the economic crisis which made Fine Gael’s “Keep the Recovery Going” slogan so annoying to many. “What recovery?”, they asked.

Now the recovery is undeniable – total employment has risen by about 200,000 in the outgoing government’s term and earnings are now firmly on the rise. But the problem for Fine Gael is that the problems of growth – housing shortages, rising rents and congestion everywhere – sees them once again under pressure. People are better off but many feel they have a poor quality of life – those stuck paying high rents or priced out of the housing market certainly do.

There has long been talk of a realignment in Irish politics – and it would take a braver person than me to go there now. But we are for sure seeing a change in the priorities and direction of economic policy – which is significant. Recent budgets have seen big increases in government spending. This has been seen in part as a catch-up from the big cuts after the crisis. But now we are into a new game – trying to catch up with the demands of a growing population and deal with massive issues affecting their qualify of life. You can argue about whether this will be solved with State money, or private-sector investment, or what other sources we might leverage. And we have seen this argued back and forth in relation to housing in the current election debate.

The much bigger question, however, is how on earth you organise it and get it done in a reasonable timeframe. How can the necessary investment be separated from the economic cycle so we don’t end up cutting back and delaying when economic growth slows, or we hit some turbulence.

The trade-offs involved here have not been addressed in the election debate – there is always an opportunity cost when you spend money;something else you could have done. And there has been little apparent pick-up – so far anyway – on the issue of what would happen if the economy does, indeed, hit another shock and how the sums would then add up.

This is a problem for Fine Gael, which is trying to play on its economic competence, the prudent budget of last October and its Brexit expertise. And the “one for everyone in the audience” manifestos from most of the parties don’t seem to have resonated either.

The exception may be Sinn Féin’s promise to spend and invest heavily with a big increase in State involvement. On day-to-day spending, for example,Sinn Féin’s proposes additional measures adding €12.2 billion to the budgeted cost by the end of the term, while Fine Gael opts for €8.7 billion and Fianna Fáil €8 billion. (The use of unallocated cash could push the totals higher in some cases.) All parties promise to boost investment – Sinn Féin adds in €4 billion expected from the National Asset Management Agency to boost the numbers, while the other parties would use this to pay down debt.

These manifestos are at best wish lists, to be diluted not only by discussions on a new programme for government, but also – much more importantly – by events. But with Sinn Féin so far gaining ground with its plans to spend more and, importantly, increase the role of the State in areas such as housing and Fianna Fáil and Fine Gael both making eyes at the centre-left parties, policy post-election is going to take on a different tone, whoever forms the next government. Even if it is a repeat of one of the big parties supported by the other.

The move towards higher spending is evident across the board.Labour and the Greens are all about spending in their manifestos. When even Ibec, the business lobby group, argues that the debate should all be about investment, a bigger State and improving quality of life – about building fewer offices and more houses – you can see something is changing.

What we have seen over the last few years, with the vast bulk of extra cash going on spending and little by way of tax reductions, was not some temporary blip as we caught up after the crash. The clear message from election 2020 will come from those stuck in the housing mess – and their families – and others demanding new investment – in transport, hospitals, schools and so on.

The greater the support for Sinn Féin, the clearer the message that the electorate believes the State needs to step in more actively. But in reality the State is being pulled into this anyway, with the outgoing government establishing the Land Development Agency and promising to step up social housing provision. And whatever mix of public and private provision you choose, the big issue is finding ways to deliver what is needed at a reasonable speed. It is a national emergency requiring a national effort.

Whether the debate lurches back towards the economic risks we face and how to prepare for them in its last week remains to be seen. I’m not sure that it will. We are in a pocket of calm on Brexit before the next drama arrives. Parts of rural Ireland are indeed worried about its impact. And some parts of the electorate will vote for more cautious policies. Ironically Fine Gael may suffer because they spent so much time of Brexit, leaving less bandwidth for other issues.

All parties will see the demand for change and more investment – to combat the housing crisis, congestion, long commutes and overcrowded emergency departments. More State investment – and involvement – is the demand. Whoever is in government after the election will respond. We can only hope that continued economic growth makes it easier for them to do so. Because if there is a downturn paying for it all becomes a lot more complicated.

1 Could Ireland put towns under lockdown if coronavirus arrived?
2 IRFU seek meeting over call to postpone Ireland-Italy match
3 Dublin man may have been stabbed to death by woman in parking space row
4 Coronavirus: Irish holding back on holiday plans
5 Irish in Italy on coronavirus: ‘The city is in a bit of panic – the streets are empty’
Real news has value SUBSCRIBE