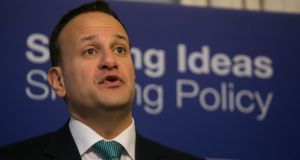 Fine Gael is displaying huge arrogance with their claim they are the only ones who can represent Ireland in future Brexit negotiations between the EU and the UK, according to Fianna Fáil leader Micheál Martin.

Mr Martin said that he had honest disagreements with Sinn Féin which he had openly expressed but he believed Fine Gael had decided to embark on a policy of attacking Fianna Fáil as part of its electoral strategy.

“Fine Gael have been relentlessly negative from the get go, attacking Fianna Fáil – the issues are housing, health, education, special needs, climate and crime – they’re broadly the issues people want to talk about on the doorstep.

“And all Fine Gael are saying is ‘We are the supremos, we are superior beings than the rest of you and nobody, only us, can do it’ and that is not resonating with people, I think they are insulting the electorate by their tactics.”

Mr Martin said that Fine Gael were displaying the same arrogance when they raised the issue of Brexit and claimed they were the only ones who can safely negotiate it through the future relationship and trade agreement stages.

“Again it’s more of this superiority complex and I think Brendan Howlin called it ‘supreme arrogance’ – look, Fianna Fáil brought Ireland into Europe, Fianna Fáil has negotiated many treaties, we brought in the Good Friday Agreement.

Speaking in Blackpool where he was canvassing with Fianna Fáil’s two candidates in Cork North-Central, Tony Fitzgerald and Paudie O’Sullivan, Mr Martin was also forthright about his party’s attitude towards Sinn Féin.

Earlier Taoiseach Leo Varadkar claimed Fianna Fáil could not be trusted to keep SinnFéin out of government, as the three leading parties continued to spar over possible coalition options.

Mr Varadkar said: “The Fine Gael position on this is absolutely unequivocal – we won’t consider a coalition with Sinn Féin after the election and that’s down to their policies – the fact that they are soft on crime and high on tax.

I will never go into government with Sinn Féin. I asked my team if they would and they answered unequivocally.

“They opposed the Special Criminal Court and they want to impose €4 billion extra taxes on Irish businesses, on people’s pensions, on property and wealth all of which would cost us jobs and cause wealth to leave the country.”

However, “ I don’t trust Fianna Fáil because quite a lot of their candidates have said that they would be open to coalition to Sinn Féin – Pat ‘the Cope’ Gallagher, Darragh O’Brien, John McGuinness, Kevin O’Keeffe and Mary Butler. ”

Mr Martin in return said that Fine Gael TDs such as Regina Doherty, Jim Daly and Kate O’Connell had all expressed positive views on Sinn Féin and it was not unusual to have differing views within parties.

“The Taoiseach is on this message but judge me by my actions in 2016 – I could have engaged with Sinn Féin after that election, I could have but I didn’t engage with them.

“In all parties, people will have views in this because we are not monoliths but he is underestimating the depth of resistance at all levels, membership, those who vote for us and TDs who will have no truck with Sinn Féin.

“We will not go into government with Sinn Féin because of how they continue to endorse the past and try and shove it down people’s throats as a correct, just war which killed innocent people.”

Mr Martin said that Fianna Fáil was also opposed to going into coalition with Sinn Féin because of the party’s policies on company taxation which he believed would stymie rather than encourage enterprise.

Focus group research carried out by Ipsos/MRBI for The Irish Times on Saturday shows undecided voters are overwhelmingly in favour of change in next week’s general election.

The research finds that some voters are attracted to Sinn Féin’s message of radical change, which was echoed in the opinion poll published in this paper last week which saw the party gain seven points to reach 21 per cent.

Asked about the research while canvassing for Michael Creed and John Paul O’Shea in Cork North-West, Mr Varadkar said he was a Taoiseach who had driven change.

Mr Varadkar cited repealing the Eighth Amendment, leading Ireland through Brexit negotiations and beginning the implementation of the Sláintecare reform in health and Rebuilding Ireland as examples of him driving change.

“I’m the person who is making change happen while other people are talking about it and we have to make sure as a country that the change we have is change for the good and not change that risks the progress we have made.”

Mr Varadkar added: “There is quite a growing list of Fianna Fáil people who are gearing up for coalition with Sinn Féin – I think there are elements of Fianna Fáil who think this election is in the bag for them.

“They are probably measuring up curtains, appointing advisers and talking about bringing back Garda cars and you know that’s the kind of arrogance we are seeing from Fianna Fáil and I hope they get a surprise next week.”

Mr Varadkar admitted that, in various constituencies, some local issues had challenged Fine Gael and he cited Cork North-Central where the party was feeling a backlash over the Dara Murphy expenses controversy. However, he stressed he would hate to see the party’s other candidates “punished” for Mr Murphy’s actions.