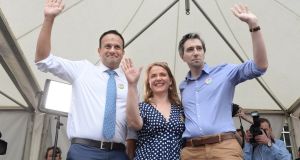 Catherine Noone was quoted in The Times Ireland edition as having said of Mr Varadkar: ‘He’s autistic like, he’s on the spectrum, there’s no doubt about it. He’s uncomfortable socially and he doesn’t always get the in-between bits’. Photograph: Dara Mac Donaill/The Irish Times.

Taoiseach Leo Varadkar has said that comments by Catherine Noone about him being “autistic” were “ignorant”, but it was not proportionate for her to lose her job.

The Fine Gael election candidate, who was elected to the Seanad after failing to win a Dáil seat in 2016, apologised on Tuesday for calling Mr Varadkar “autistic” during an election canvass this week.

She was quoted in The Times Ireland edition as having said of Mr Varadkar: “He’s autistic like, he’s on the spectrum, there’s no doubt about it. He’s uncomfortable socially and he doesn’t always get the in-between bits”.

Mr Varadkar told RTÉ radio’s Morning Ireland: “what she said was ignorant.” But Ms Noone did not have to apologise to him, she needs to apologise to the autism community.

“She made a very big mistake, but it is not proportionate for her to lose her job.”

The Fine Gael leader also denied that Ms Noone was not allowed to do media interviews. It had been reported that senior party figures, including Minister for Finance Paschal Donohoe - who is Fine Gael’s director of elections - and Tom Curran, the general secretary, had denied a request by Ms Noone that she be given the opportunity to explain herself in a broadcast media interview.

Mr Donohoe and Mr Curran stipulated that she first be assessed in a mock interview by the party press office before agreeing to such a request.

Sources said that following the mock interview, it was decided not to put Ms Noone out on the national airwaves.

Mr Varadkar said that “ultimately the decision about interviews is left to the person themseves.”

The Taoiseach also rejected criticism of Minister for Housing Eoghan Murphy and Minister for Health Simon Harris saying he did not like politics when it gets “personalised.”

He said that Fine Gael criticism of Fianna Fáil TDs Timmy Dooley and Niall Collins had been about ethics, it hadn’t been personal.

Mr Varadkar said that progress was being made in relation to housing, but it was not credible for an opposition party (Sinn Féin) to say they would build 100,000 houses. “We’re the ones with the most credibility.”

Sinn Féin’s policies were too extreme and had not worked elsewhere, he said.

Fianna Fáil’s manifesto has gaps, he said. He “couldn’t get over” the fact that they had budgeted only €2billion for health, which was not enough for Sláintecare.

“They got their choices all wrong.”