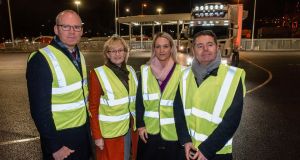 Fine Gael was at sixes and sevens this week over a pause on a vote-management pact between Richard Bruton and running mate Catherine Noone in Dublin Bay North.

The Irish Times scoop that a vote management strategy – dividing the constituency into sections which would see party supporters asked to give a first-preference vote to a specific candidate – was paused caused ructions within the party.

It came after Noone called Leo Varadkar “autistic”.

Bruton initially claimed the story was a fabrication but later said Fine Gael headquarters had acted without consulting him.

Evidence, if evidence were needed, of a High Noone showdown over the affair appears to have manifested itself in the constituency over recent days.

Separate posters of each candidate – each urging a number one preference on the ballot paper – are attached to the same lamp post.

But Bruton’s poster is covering up Noone’s. Perhaps one was sliding down the pole.

Michael Healy-Rae has revealed his ambitions for a seat at the cabinet table should he hold the balance of power in post-election talks.

Here they are now. All the lads. pic.twitter.com/dQhRzNpxK1

And it appears he will be holding out for a newly created brief: Minister for Kerry.

Asked if he would be interested in high office, he acknowledged he would, and laid out what he could bring to government’s top table in the national interest.

“If an opportunity arose that would help the people of Kerry, and help the lot of the environment in Kerry, or farmers or fishermen – every section of society in Kerry – if I could help them by answering a call, if a call came, I would have no problem whatsoever,” he told Radio Kerry.

– Labour leader Brendan Howlin dismisses Government claims that it has secured a “bulletproof” agreement for the UK’s withdrawal from the EU, warning a hard Brexit “is still a very real possibility”

An anthem for Mary Lou

Election 2020 has been devoid of campaign songs.

But if Mary Lou McDonald was considering an anthem, she might look to Morrissey. In his 1994 album Vauxhall and I, the Irish Mancunian sings of dismissing the disinterest of an unrequited love.

“The more you ignore me, the closer I get ... you’re wasting your time,” he sings.

Repeatedly ruled out as a coalition partner by Fine Gael and Fianna Fáil, the Sinn Féin leader appears to be paying no attention to her own spurned affections for power.

63 – Percentage of public servants, in a poll for trade union Fórsa, who said they would consider voting for parties they had never voted for before if they promised to give them a pay rise.

Early risers roll in, roll off

Leo Varadkar won the leadership of Fine Gael with a pitch that it would stand for “people who get up early in the morning”.

But a bizarre pre-dawn Brexit day stunt at Dublin Port on Friday left many scratching their bed-heads. A handful of red-eyed reporters turned up for the 5am photo op of party big-hitters Simon Coveney, Paschal Donohoe, Helen McEntee and MEP Mairéad McGuinness watching lorries drive off a ferry.

A glossy video was later posted online, showing European Parliament vice-president McGuinness pointing out to Donohoe that lorries were indeed coming off a ferry.

One of the few reporters there, Virgin Media’s Richard Chambers, yawned: “This is without question the weirdest thing I’ve ever been at.”