Derry students on Brexit: ‘The energy has drained from it’

In Oakgrove College, the conversation has moved on, but Border worries still simmer 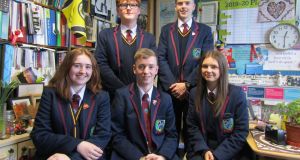 Of the many issues on the minds of the students at Oakgrove Integrated College in Derry, Brexit is not one of them.

“I was quite into it back in October – Brexit was on the news all the time, and everyone was afraid of October 31st,” he says. “Now there’s been very little talk.”

“It does matter,” says Pearse McGowan, “but I don’t think anybody’s too bothered about it. It doesn’t seem as if anything will actually change.”

“The energy has drained from it,” adds Saule Nausedaite. “At the start everyone was concerned about it, but it’s gone on for so long, nobody has the energy to fight about it.”

“It’s not that they don’t care, it’s just tired out,” says Tara Garfield.

They and their classmate Jack Hamill are all in their final year at Oakgrove. Brattin is 18, the others 17; though too young to vote in the Brexit referendum in 2016, they admit to suddenly becoming well versed in the debate.

“It was a big conversation in my house because I live past the Border,” explains Saule. She is from Killea, “a minute” into the Donegal side.

Her family’s concern was about access to schools. “My younger brothers both go to school in Derry, all my friends are in Derry, so what would happen if there was a hard bor to school here and I’ve never done anything down there. Everything I do is in der?

“But in the back of my mind I thought it would work out. I didn’t really think there would be a hard border.”

For Jack, this is a relief. He hopes to study computing at Letterkenny Institute of Technology, in Co Donegal. “Brexit could have been a problem. When I was applying they said there might be changes to fees because of Brexit.” Now, he is unconcerned. “I’m just going to see what happens.”

Each of the students is pro-Remain; they struggle to think of anyone they know who is a Leaver, and eventually come up with one name. “There are very, very few,” says Conor. “They’re hard to find.”

Derry’s constituency, Foyle, returned one of the highest Remain votes in the UK, at almost 80 per cent, reflective of both its position on the Border and its strong nationalist majority.

For Tara, Brexit has heightened that sectarian divide. “You feel more separated,” she says, explaining that the narrative had become polarised. “It was, ‘if you’re this then we’re just going to assume you voted that.’”

As an integrated school, Oakgrove was set up to educate children of all religious backgrounds together in order to promote reconciliation and heal divisions in Northern Ireland; places are allocated to ensure a balance of students from Protestant, Catholic and other religious backgrounds.

It’s like the minute you say you’re from Northern Ireland you’re stuck with the Troubles, as if it’s still going on

“Nobody our age really cares about religion,” says Tara. “It’s never been an issue with us.”

“We didn’t grow up during the Troubles,” adds Saule. “We don’t have the same emotional connection to it as older people. We all know about it, we all know stories about it, but it’s not like it was for people who grew up during it.”

Yet they agree it still has an impact. “People try and think they’ve a reason to riot but they don’t, not really,” says Pearse. “They’re acting like they grew up in the Troubles.”

“They’re using it as an excuse,” says Tara. “It’s like the minute you say you’re from Northern Ireland you’re stuck with the Troubles, as if it’s still going on.”

One of the consequences of Brexit, Nausedaite points out, is that it has “opened up the possibility of a united Ireland”.

The South doesn’t want us. Why would the South want us and all our problems?

Will it happen? They are unsure. “Do I think it will happen? No. Is it closer than it’s been in a long time? Yes. It’s a bit like the hard border, there was the potential, but will it happen? Probably not,” says Conor.

For him, there are too many unanswered questions.

“Who votes for it? Does Ireland have a vote? The South doesn’t want us. Why would the South want us and all our problems?

“Does the UK have a say in it? I’m sure they would, and obviously they’re not going to be too happy – or maybe they want rid of us? You never know.”

Coronavirus: HSE braces for possible peak of Covid-19 cases in mid-April 13:32
Man who allegedly spat at garda and said he had coronavirus due in Cork court 10:49
Irish flight bringing PPE from China due in Dublin in afternoon 10:29
Coronavirus: Sweeping powers with fines of up to £5,000 come into force in North 07:56
Leading Northern Ireland lawyer in critical condition because of coronavirus 22:12