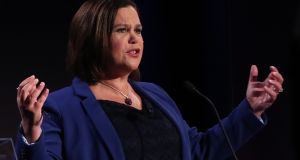 Have Fine Gael-led governments since 2011 cut Garda station numbers and cut recruitment into the force?

During Monday night’s Claire Byrne Live leaders’ debate on RTÉ there was much discussion of crime rates and Garda resources following violent crimes in Drogheda and Cork in recent weeks.

Sinn Féin president Mary Lou McDonald claimed: “Leo Varadkar’s Government and the government before cut Garda stations and cut Garda recruitment, leaving communities vulnerable to the very thugs that strike fear in communities.” She went on to claim that 139 Garda stations were closed “on the watch of Fine Gael and Fianna Fáil”.

Upon what is Sinn Féin basing its claims?

Asked to provide evidence for this claim a Sinn Féin spokesman cited as one example Minister for Justice Charlie Flanagan’s response to a parliamentary question by Fianna Fáil’s James Browne in 2017. Mr Flanagan said: “As the Deputy will be aware, some 139 Garda stations ... were closed under the Garda Síochána District and Station Rationalisation Programme 2012 -13 in order to streamline practices and to provide the most efficient policing service possible with the scarce resources available at the time.”

Fine Gael formed a government with Labour after the 2011 election and then minister Alan Shatter announced the closures, carried out during that coalition’s term.

In a response to a parliamentary question in February 2018, Mr Flanagan listed 139 closures made under the programme between 2012 and 2013. Kilmihil station in Co Clare was one of the stations closed, but it was subsequently reopened in 2015, with Lissycassey station shut in its place.

A Garda spokesman said there had been no other closures since.

A new Western Regional Headquarters in Murrough, Co Galway, was opened in 2018, while Donard Garda station in Co Wicklow reopened last March, as part of a Government project to reopen six stations on a pilot basis.

The number of gardaí in the force at the end of 2011, the year Fine Gael took office, was 13,894 (excluding civilian staff and the Garda reserve).

Recruitment at Templemore Garda college was stopped in 2009 when the Fianna Fáil government decided not to bring in any new recruits until the country’s financial position improved amid pressure from the EU and IMF.

The last class graduated in 2011 before recruitment began again in 2014.

In a response to a parliamentary question in May 2019, Mr Flanagan said: “Approximately 2,600 Garda recruits have successfully completed training and attested as members of An Garda Síochána since the reopening of the Garda College in 2014.”

Three classes of recruits were taken on in 2019, with Garda Commissioner Drew Harris saying he hoped 600 would graduate having chosen to take a different approach to recruitment than the Government’s target of 800. The commissioner chose to hire more civilians instead and redeploy about 500 gardaí from administrative duties to operational jobs.

For 2020, the Government in its budget statement said it was planning for “up to 700 trainees”. Since 2014, the number of gardaí has risen every year to its current level of 14,336, according to the Garda Commissioner’s report to the Policing Authority for December 2019.

There are also 3,195 civilian staff bringing the total numbers to their highest ever level.

The number of Garda stations has fallen during the terms of the last two Fine Gael-led governments with almost all the closures taking place in 2012 and 2013. In relation to recruitment into the Garda, that was first curtailed by a Fianna Fáil government, a policy that was initially continued by the Fine Gael-Labour coalition, before being reversed with the “re-opening” of Templemore in 2014.

Ms McDonald’s claims are therefore partially true, as there is no evidence of cuts under Leo Varadkar as Taoiseach, or indeed under Enda Kenny from 2016.