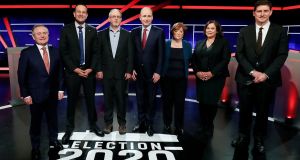 The leaders of Sinn Féin and Fianna Fáil have clashed over whether a freeze on rents could be delivered by the next government.

In a heated televised leaders’ debate on Thursday, Micheál Martin said his party had received legal advice that ruled out any move to prevent landlords increasing rents.

“I am very strongly in favour of rent controls and a strong rental regulatory system,” he said. “We have received advice that [a rent freeze] is unconstitutional. I don’t want to promise something I can’t deliver.”

However, in one of a number of clashes between the pair during the fractious Tonight Show debate on Virgin Media One, Sinn Féin leader Mary Lou McDonald said such a rent freeze was necessary.

“We also need to cut rents by way of a tax relief and we need a rent freeze,” she said, adding that Mr Martin’s “flip flopping” on the issue was “astonishing”.

“He just doesn’t want to do it and he is hiding behind highly questionable legal opinion.”

Labour leader Brendan Howlin insisted rent freezes were possible, saying there could be a repeat of a two-year rent moratorium introduced in 2014.

Taoiseach Leo Varadkar, leader of Fine Gael, cited the Berlin experience which he said demonstrated such moves to halt increased rents only exacerbated the problem.

The debate also featured Eamon Ryan of the Green Party, co-leader of the Social Democrats Catherine Murphy and Mick Barry from Solidarity-People Before Profit.

It was characterised from the off by aggressive questioning, raised voices and interruptions. Ivan Yates, who co-hosted the debate with Matt Cooper, began by addressing a panel of “chancers and charlatans”, and leaders were often cut off or given little time to elaborate on positions. The tone provoked criticism on social media.

At the outset the participants were asked whether they were engaged in a “fundamentally dishonest election” given the discussion around the presumption of an €11 billion budget spending pot.

“In actual fact,” Mr Yates said, “the Department of Finance have not assured us that that money will be available.”

The Taoiseach said it was a “fair point” but that the projections were made by various State and other bodies and defended the Government’s fiscal record.

Mr Barry said government expenditure should be fuelled by a tax on the rich – the 17 wealthiest of whom, he said, had accumulated €40 billion between them, citing an Oxfam report. His grouping would propose to raise taxes on the top 5 per cent.

Mr Howlin agreed with Mr Yates that the election debate had begun from a dishonest financial position. “Each of the (other) parties . . . are now promising huge giveaways of tax again and it’s a con job on the Irish people,” he said.