Greens will ‘walk away’ from talks unless climate is priority

Fine Gael’s plans to reduce emissions by 2 per cent a year are ‘not enough’, says Ryan 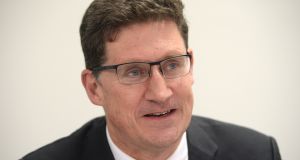 Green Party leader Eamon Ryan has said his party will “walk away” from any potential Government formation talks if larger parties do not fully commit to a comprehensive climate change agenda.

Speaking at the launch of the Green Party housing policy on Saturday, Mr Ryan said he is hoping to secure “double figure” support for the party by the end of week and predicted that Government formation talks will be “really tough.”

“We have a week to go until the election with another good poll for us there this morning. We’re anywhere between seven and 10 per cent, and hopefully we might get into double figures. That should give us, I think, a really strong voice in the next Dáil and in whatever happens in terms of the formation of government.

“In this last week I think there’s one question that needs to be asked of other parties and that is around what their real plans are on climate change because it’s been ignored so far in this election.”

He said that Fine Gael’s plans to reduce emissions by 2 per cent a year are “not enough” and said the Fianna Fáil and Sinn Féin manifestos also do not address the issue fully.

“They really are sticking to the status quo. There’s nothing different, there’s nothing new. Any programme for government will have to answer those questions otherwise it’s a complete false programme for government, otherwise we’re facing a €7bn fine and all your figures go out the window anyway. So, that will not be an easy negotiation, that will require really tough talks.

“If other parties aren’t willing to [have] that level of ambition on climate and designing, housing and transport in a way that meets that bigger objective, we’d have to walk away and say these people aren’t for real.”

“It has to be centre stage, ignore it at your peril,” he said.

Mr Ryan said he believes it is “still all to play for” and the “Irish people are still making up their minds.”

The party was launching its policy on housing on Saturday morning which includes plans to build over 20,000 homes on public lands in Dublin City.

The party said it wants to replace Rebuilding Ireland with a national housing plan. It said it would roll out Housing First programmes across the country to deal with homelessness and invest in a major programme of deep retrofitting.

Ossian Smyth, the party’s candidate in Dun Laoghaire, said there is a “huge opportunity” to use a “massive quantity of lands that are either in state ownership or under state control.”

“If there was a political will from the ministers in those departments to command agencies to allow housing to be built on them, I think we could go a long distance and we could certainly get 10,000 units into the centre of Dublin city.

“I think that could help those people that Leo Varadkar talks about who are supposed to get up early in the morning, who really don’t want to get up at half past five, but are long distance commuters and have been forced out of the city.”