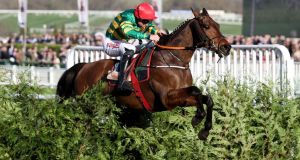 The Irish horse racing industry cannot adapt its product to suit new markets and British racecourses such as Cheltenham and Aintree cannot be replicated elsewhere, a Seanad committee on Brexit has heard.

Horse Racing Ireland’s chief executive officer Brian Kavanagh told the committee on the withdrawal of the UK from the EU his industry would not be able to locate a replacement market for Britain.

“When it comes to exporting our racehorses – especially those destined for the jumps market – there is no replacement market for Britain and so unlike many other Brexit-hit sectors, we simply cannot adapt our product to suit new markets,” Mr Kavanagh said.

“Royal Ascot, Cheltenham, Aintree and Epsom cannot be replicated in another country.”

Any “uncoupling” of the relationship would be very damaging to British racing and “catastrophic” to the Irish racing and breeding industry, which was worth more than €1 billion per annum to the economy.

Anything other than the current integration and ease of movement for people and horses would have significant negative consequences for Ireland.

He said Horse Racing Ireland would meet the Minister for Agriculture Michael Creed on Friday to discuss Brexit. He hoped the Irish industry in conjunction with the British and French industries could compile a document for the attention of the European Commission’s chief Brexit negotiator Michel Barnier.

Meanwhile, the committee was warned that “poachers and pollution” do not recognise borders and could thrive on “chaos and inertia” in a post-Brexit situation.

Sharon McMahon from the Loughs Agency said the UK’s withdrawal from the EU was potentially one of the biggest threats to the environment in the medium to long term.

It was imperative that natural resources in the Border counties continued to be protected.

Ms McMahon said the UK had transposed EU directives into national legislation, but uncertainty surrounded how this would work in future.

“We are concerned that as time passes amendments are made to EU/UK legislation that both will fall out of sync. Environmentally this is troubling.”

John Comber, president of the Irish Creamery Milk Suppliers Association (ICMSA), told the committee the introduction of tariffs on cheddar cheese between the EU and UK would have serious negative implications for Irish dairy farmers.

“It would simply create carnage in rural Ireland in terms of employment...there’s no way to dress it up,” he said.

The only solution was tariff-free access to the UK market.

Irish dairy farmers had traded heavily with the UK not because of “lazy marketing” but because it was the most lucrative market.

There were some opportunities for agriculture post-Brexit but these were far outweighed by “threats and risks”.