Enda Kenny to step down today after six years as Taoiseach 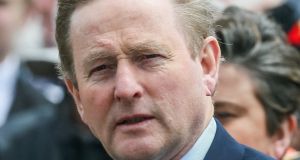 Enda Kenny is to resign as Taoiseach on Tuesday paving the way for Leo Varadkar to be elected on Wednesday.

Mr Kenny will host his final Cabinet meeting on Tuesday morning after six years as head of the Government.

The Dáil will hear a series of farewell speeches from across the House.

His successor, Mr Varadkar, will be appointed at midday on Wednesday, with support from 58 TDs including Fine Gael, the Independent Alliance, two Independent Ministers and Independent TD Michael Lowry.

Fianna Fáil has confirmed it will abstain in the vote, ensuring Mr Varadkar’s elevation.

Mr Varadkar will then confirm his reshuffled Cabinet in the Dáil at 6pm on Wednesday with minimal changes expected.

Two Ministers of State, Eoghan Murphy and Michael Ring, are expected to be appointed to Cabinet, while Government Chief Whip Regina Doherty is expected to be allocated a senior ministry.

Speculation continued on other potential changes, with Minister for Foreign Affairs Charlie Flanagan touted for a possible move to the Department of Justice.

Minister for Housing Simon Coveney is understood to be seeking a move to the Department of Foreign Affairs to oversee the Brexit negotiations.

Mr Flanagan, who served as Fine Gael spokesman for justice in opposition, is keen to remain in his current portfolio but has been linked to replacing Frances Fitzgerald in justice.

Other names linked to the Department of Justice include Minister for Education Richard Bruton.

However those close to Mr Bruton have stressed his desire to remain in education or move to an economic portfolio.

It is also expected Attorney General Máire Whelan will stand aside this week to allow for Mr Varadkar to make a new appointment. The Irish Times understands Frank Callanan is in line for the position. Mr Callanan is a member of the party’s trustees and is seen as a strong supporter of Mr Varadkar.

Speaking in Dublin on Monday, Mr Varadkar declined to be drawn on the possible make-up of his Cabinet.

The new Fine Gael leader said: “I am giving a lot of thought to a lot of things at the moment. The first priority is to secure the abstention of Fianna Fáil and the votes of a number of Independents so we can elect a new taoiseach and government on Wednesday.

“That is the first priority. I have been giving thought to the new ministerial team and the structures of the departments.

“I have made no final decision on that and I may not do so until Wednesday.”

Sources have insisted Minister for Health Simon Harris will remain in his current portfolio despite supporting Mr Coveney in the leadership contest.

Mr Harris told reporters in Limerick on Monday he loved his current job and was happy to remain in the Department of Health.

Mr Lowry told The Irish Times he would support Mr Varadkar on Wednesday and in the next two budgets.

However, he insisted he did not offer any commitment for any other votes and did not receive anything in return for his backing.

Mr Lowry said he met the Fine Gael leader on Friday and raised a number of constituency matters with him.