What can Irish left learn from Corbyn’s UK election success? 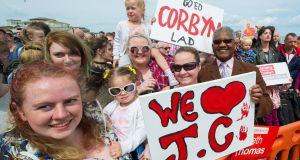 In the 1930s Éamon de Valera cruelly put down the prospects for a socialist government in Ireland by saying, “Labour must wait.”

It has been a long wait. Left-leaning parties have never had more than minority status here – and the further left one goes the more marginal the presence has been. But the British Labour Party, with an unashamedly left-wing leader in Jeremy Corbyn, exceeded all expectations in last week’s UK general election. It is still trailing the Tories, but Corbyn was one of the big winners.

Are there lessons that parties of the left in Ireland – from the moderate, in Labour, to the strong, in Solidarity-People Before Profit – can learn from that success?

“I think there are,” says Pearse Doherty, finance spokesman of Sinn Féin. He believes the British Labour Party energised younger voters not only to take his message on board but also to cast their ballot in large numbers.

“Jeremy Corbyn against all the odds brought out a vote which traditionally does not come out to vote. Labour used clever campaigning to do that. They went beyond the old ways of media and the red tops” – tabloid newspapers – “which were all very hostile to him and to his ideas.

Corbyn used social media to engage a new generation of voters who were more open to left-wing politics, despite the opposition of the establishment and media

“He used social media to engage a new generation of voters who were more open to left-wing politics, despite the opposition of the establishment and media and certain elements within his own party.”

Doherty believes that outsider image worked to Corbyn’s advantage. “He was seen as a nonestablishment politician who could speak to those who were fatigued from continuous austerity.”

The Donegal TD says his own party has succeeded with that strategy in Northern Ireland but not to the same extent in the Republic. The party and its politicians are indefatigable users of social media, and they have directed their messaging at younger voters.

If you look at our campaign it was about issues like marriage equality and Irish-language rights. These are the issues that energised a young cohort of people

“We were able to instil a sense of belief in young people that change can come about. Many commentators in the South have described the election as a sectarian headcount, which is insulting. If you look at our campaign it was about issues like marriage equality and Irish-language rights. These are the issues that energised a young cohort of people.”

Like other politicians, Doherty admired the fact that Corbyn could campaign on third-level tuition fees, take an anti-globalisation stand, argue for renationalisation of the railways, call for more taxes on wealth, and oppose foreign aggression. He says such messages – which the Irish establishment scoffs at as impractical – brought the Labour leader close to becoming prime minister.

“It’s not about the label. It’s about the ideas. The ideas we have are very different from the Irish Labour Party or from the Solidarity-People Before Profit alliance. We believe we are capable of delivering those policies in government but still have that spirit of entrepreneurship and risk-taking that it so important.”

He points out areas where there could be co-operation between left-wing parties, such as the anti-water-charge movement.

Ruth Coppinger of Solidarity also highlights the obstacles Corbyn overcame. “There are so many lessons to be learnt. The first is that a very right-wing media can be bypassed in elections. This was breaking one of the cornerstones of the Murdoch mantra that [media organisations] could decide who was to be in power,” she says.

“What is most exciting is the youthful support for a very straightforward manifesto that advocated a £10-an-hour [or €11.50 an hour] minimum wage, renationalisation of vital industries such as railways, the building of 500,00 public houses, important reform, and the idea of taxing wealth in order to pay for those [things]. We hear so much guff about young people not being interested . . . but there was a massive increase in young people registering and voting, and women as well.”

Coppinger points to what she says is an international aspect, with the similar prominence of the left-wing presidential candidates Jean-Luc Mélenchon, in France, and Bernie Sanders, in the United States.

“These are three important left-wing candidates. In Britain it is not just young people: it’s also the traditional Labour vote coming back, which had drifted away because [the party] had become Tory lite.”

Coppinger believes that social media allows people to create their own narrative, but she says also that Corbyn and Sanders succeeded because they toured towns and cities and addressed rallies.

“Young people saw a purpose in joining the Labour Party, because it had a leader that was articulating things that mattered to them.”

How can that rise be repeated in Ireland?

“I don’t think there is any danger a left-wing surge or movement could emerge through the Labour Party or Sinn Féin,” she says. She castigates the Irish Labour Party for its “treacherous” coalition arrangements, and Sinn Féin for what she says is its support for austerity in the North, as well as for not being at the vanguard of the anti-water-charge protests and the Repeal the Eighth campaign.

She says such popular movements provided opportunities . “They opened up a political space where people saw the potential to challenge austerity policies. Movements like that will lead to people joining existing formations, like Solidarity-People Before Profit. The left here is quite small. We need to get people politically active. We have to build a left moment.”

Coppinger believes that movement, if it is successful, will come from outside the mainstream. Aodhán Ó Riordáin disagrees. The Labour Party Senator says that he was delighted and encouraged by the British Labour Party’s performance but that it needs to be put in context.

“Corbyn did not win it. Twenty years ago having a Labour government in the UK was the priority. It feels a little odd to be celebrating a party that came second . . . After seven years of Tory rule they are still not close to toppling them.”

What lessons does he draw from it?

I can’t remember an election where the Irish Labour Party had a good campaign in my lifetime, even when we did well

“I can’t remember an election where the Irish Labour Party had a good campaign in my lifetime, even when we did well. For Corbyn everything was awful until the campaign kicked off. His tone was polite and measured, and he was positive. His manifesto was far clearer, and it was clear he had confidence in his policies.

“The problem we have in Ireland is that when we have a manifesto people don’t believe in it any more, because they know we have gone into a coalition . . . If we had more self-confidence and a stronger manifesto that people could identify with, and a determination that there were red lines we would never bend, that would be the lesson.”

But how do you measure the Irish Labour Party’s performance?

“I know the hard left will say there is a lesson there, but there is a big difference between the British Labour Party and the hard left here. The former has aspirations for government. The latter have no such aspiration. You measure a political party with what it has done and what is achieved. We have been the only party of the left in government for a prolonged period of time.

“There is a fundamental argument in the left on whether your stand by principles or do something to improve the lives of those on whose behalf you stand. We gave up a long time ago on absolute extremist adherence to principles, on the basis that you can achieve more if [you] can compromise.”

The Donegal deputy Thomas Pringle is one of a number of left-wing Independents in the Dáil. He says that what heartened him about the success of Jeremy Corbyn and the British Labour Party was the message.

People are interested in policies and issues rather than personalities. When they are spoken in a way that connects with people you can make real change

“It shows that people are interested in policies and issues rather than personalities. When they are spoken in a way that connects with people you can make real change. His policies were about decency and fairness and a just society, not just market driven and market led.”

Like other left-wingers, Pringle refers to Corbyn overcoming the resistance of the establishment. Unlike others, though, he does not see change coming along a traditional party route.

“The combined right vote has declined to less than 50 per cent. The task for us is that it continues to fall. People don’t believe me, but I think that in its place we could have a progressive government of Independents, both individuals and groups. You can have people who decided as a matter of principle to work together.”

Is that not a flight of fancy?

“There is too much emphasis on cohesion. It suits the establishment and the media to have a perception that it’s unstable and all of that. That’s what the media in Britain tried to do with Corbyn. That’s why he had to bypass the media, because they were so hostile.”

It’s clear that some on the left believe that Corbyn’s unexpected success could be repeated here in the not-too-distant future, finally making de Valera’s put-down redundant.