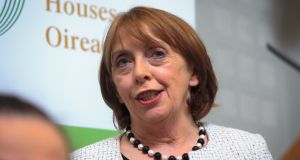 Tánaiste Frances Fitzgerald has deflected questions about the ownership of the new National Maternity Hospital (NMH) and said what was important now was to build the facility.

She told Social Democrats TD Róisín Shortall,who asked if the hospital would remain in public ownership on moving to the St Vincent’s campus, that the Minister for Health “is still considering some of the outstanding issues you have raised”.

Ms Shortall said “we haven’t heard the Minister or the Government on this week’s developments, but we have heard from SVHG (St Vincent’s Hospital Group) that despite the departure of the Sisters of Charity, the terms of the Mulvey Report will still apply”.

She warned that the hospital group was a private corporate body and “has no right to dictate Government policy. A publicly funded hospital, for public patients, should, of course, remain in public ownership.”

Ms Shortall was concerned about the issue of two public hospitals within a private corporate entity .

Ms Fitzgerald said issues were still being considered but that very clear arrangements had been made for a transition after the Sisters of Charity announced the end of their involvement in the healthcare group .

Raising concerns about the SVHG Ms Shortall asked Ms Fitzgerald to accept that it would be “imprudent in the extreme to contemplate exacerbating the anomalous corporate governance arrangement in SVHG by adding yet another public hospital to their portfolio of assets”.

The Dublin North West TD said the hospital group “epitomises many of the structural problems within the Irish health system. The need to disentangle this dysfunction was a key recommendation of the Committee on Future Healthcare.”

There were questions about the financial arrangements within the group, top ups and salary scales and a review of the public private mix of consultants’ work was due to begin, she said.

She added that the group had been under audit by the HSE for some time. Concerns relate to the entanglement of St Vincent’s University, and St Michael’s Hospital, both public hospitals on one hand, and St Vincent’s Private Hospital on the other, and the suspected cross subsidisation from public to private.

“The HSE still haven’t been informed about the detail of the charge created on St Michael’s by SVHG in favour of Bank of Ireland.”

The Social Democrats joint leader asked if the Tánaiste could guarantee that public money would only be used in the public interest and that the Government would “ensure that the public purse is protected by ensuring that the new national maternity hospital will remain in public ownership”.

Ms Fitzgerald reiterated that the Minister for Health “continues to look at a number of issues” and “should be given the remaining time to continue that work”.

She acknowledged that Ms Shortall was making a broader point about the ownership of hospitals and said “there is a political discussion to be had on that. There are many different elements to it.”