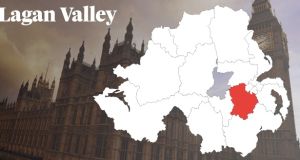 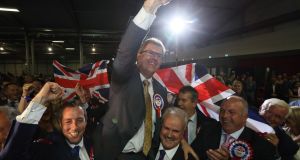 The Democratic Unionist Party (DUP) romped to a landslide victory in its Lagan Valley stronghold, with a record poll of nearly 27,000 for sitting MP Jeffrey Donaldson.

Mr Donaldson was the strong favourite heading into the count at the Eikon Centre in Lisburn on Thursday night, a view reinforced by early tallies as opposition parties conceded that the incumbent’s share of the vote could top 50 per cent.

That eventuality came to pass for a man who has occupied the Westminster seat for the constituency since 1997, and Mr Donaldson secured his largest total of votes in his entire time as a DUP representative to claim nearly 60 per cent of the valid poll.

It represents a marked improvement in support compared with the last parliamentary elections in 2015 when he attracted 19,000 votes as turnout in the constituency topped 62 per cent this time around, six percentage points more than in 2015.

In his victory speech, Mr Donaldson referenced a swing to the DUP in the area, encompassing population centres such as Lisburn and Hillsborough, which helped secure a landmark achievement for the party.

“I think that the result in Lagan Valley is very clear. I think there has been a swing to the Democratic Unionist Party, that is evident. And when some were predicting doom and gloom for my party, when some were writing us off, here we are once again – we’ve bounced back,” he said.

The result was tinged with optimism, however, as Mr Butler recorded an increase in total vote terms on the UUP’s 2015 showing in the area, although the defeated candidate was left to “reflect on the huge majority” won by his rival.

Elsewhere Sinn Féin continued to struggle with a poll of just 1,500, while Alliance candidate Aaron McIntyre regressed on his party’s performance at the last Westminster elections, losing over 500 votes despite the larger turnout.