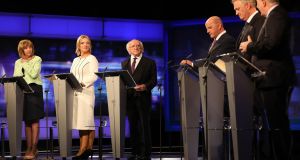 Michael D Higgins was re-elected President of Ireland with almost 56 per cent of the vote, enough to win the election on the first count, as forecast by an Irish Times/Ipsos MRBI exit poll.

However, despite his margin of victory, support for Mr Higgins has fallen over the campaign while support for businessman Peter Casey, whose campaign was marked by criticisms of Travellers and their separate ethnic status, surged ahead of all the other challengers in the final days to finish with 23.25 per cent of the vote. Here we look at the key moments of the presidential campaign.

The hearing of the Public Accounts Committee into Áras spending was held on the eve of the close of nominations on September 25th. It was branded by Higgins’s supporters as a political witch-hunt.

It did, however, raise a few substantial issues which showed a significant opacity in the President’s office when it came to sharing information on spending and value-for-money.

It emerged that an annual allowance the President receives amounting to €317,000 is unaudited. It was also disclosed that the audit committee in the Áras had gone four years without a meeting.

Marc McSharry of Fianna Fáíl used the term “slush fund”. It stuck. Higgins was still being asked to explain what the €317,000 was used for in the final days before polling.

In 2011, Michael D Higgins pledged he would serve only one term. During the latter stages of his first term, he let it be known he wanted to run a second term, citing new challenges, his strong health, and having been approached by many people to run.

This was a potential vulnerability for him.It came up on the doorsteps and was mentioned but did not seem to be a major factor. His rivals said his lateness in announcing his candidature forced them into rushed efforts to secure nominations.

Peter Casey introduced the dogwhistle into the campaign during a podcast in mid October. He made divisive comments about “selfish’ Travellers refusing to take up six new houses worth €1.7 million in a Tipperary village because they were demanding stables and paddocks for their horse.

The local dispute was more nuanced than that, and had to do with grazing rights. The candidate refused to withdraw his comments and indeed restated them with more intensity.

Casey also said he did not recognise their ethnicity. The next day he went down to view the estate in Tipperary.

He faced hostile questioning from the media and was accused of racism by local Travellers (who he declined to meet).

Stung by some of the criticism, he considered withdrawing from the race but stayed in. His contentious views saw his support soar from 2 per cent to 20 per cent according to the polls, comfortably in second place.

This was potentially a hugely embarrassing issue for Michael D Higgins. It emerged he flew by Learjet for the almost ridiculously short journey from Dublin to Belfast, saving himself minutes rather than hours.

When asked, he first cited security concerns; saying there was no PSNI pick up at the Border.

That was then contradicted by the PSNI. There was a clear change in the explanation. It was now his office’s decision based on security and logistics, which was very different to the original ‘security concerns’ line.

One of the aims of the Sinn Féin campaign was furthering the debate on Irish unity. But the biggest takeaway from Liadh Ní Riada’s campaign in this area, will be the fact she disclosed during the Claire Byrne debate on RTÉ she would be willing to wear a poppy.

That caused some disquiet among the ranks party members. Some, like Pádraig Mac Lochlainn, said he would never be willing to wear a poppy. Ní Riada might have struck a chord for moderate non-Sinn Féin voters, but she struck a raw nerve with some colleagues.

This was another issue Ní Riada found impossible to escape. Some years ago, on a Facebook post, and on local radio, she had raised questions about the HPV vaccine, administered to teenage girls to prevent cervical cancer in later life.

After a lot of to-ing and fro-ing, Ní Riada said the comments were “naive” and should not have been made and she fully supports the vaccine. However, despite persistent questioning she refused to say whether or not her daughters had received the vaccine, citing privacy reasons.

At his official launch on September 26th, Michael D Higgins announced he would take part in three live debates, one on radio and two on TV.

His opponents were highly critical, saying Higgins was picking and choosing, and laying down the rules of engagement.

They were also unhappy that he was also fulfilling many high-profile presidential engagements.

However, efforts to single him out as being too “arrogant” to participate in other debates were negated by the decision by Seán Gallagher that he would not participate in any debate that did not include all contestants. Gallagher went back on that idea for the final TV debate.

Joan Freeman spent a big portion of the early part of her campaign defending a loan of €120,000 she got from a Los Angeles-based businessman Des Walsh. When reporters googled him, they found he used to be head of a company which was investigated for pyramid selling.

Freeman said he was a former boyfriend whom she knew 40 years ago and had lost contact with. He had given her the loan in a personal capacity and she would repay it all. Freeman also said she could not have participated without a loan as she did not have the means of the other millionaires in the field.

Sean Gallagher had spent six of the last seven years involved in a court case over the infamous Tweet that downed his 2011 campaign.

He was hoping that somehow in 2018 he could reproduce the promise of the early part of his last campaign. But it did not work out that way.

His big issues (promoting job creation and innovation) no longer seemed a fit for the president as they did in 2011.

He also spent a good deal of his time explaining what he had been doing for the past seven years.

Not such a moment as a phenomenon. You have to pity Gavin Duffy. When he entered the race, he was sure there would be no other Dragon.

But having glanced away for only a second, he discovered there was not one, but two other Dragons in the field.

It made for a strange situation. It became truly farcical when through a quirk of a draw of lots, all three were placed side-by-side in the final Primetime debate on RTÉ.