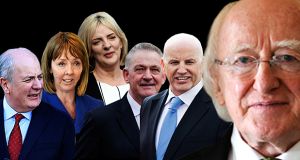 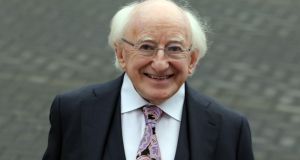 Michael D Higgins is set to be easily re-elected President of Ireland when the votes are counted on Saturday, according an Ipsos MRBI exit poll for The Irish Times, despite a strong showing for Independent candidate Peter Casey.

The poll projects that Mr Higgins will win 56 per cent of the vote, comfortably enough to win the election on the first count.

But turnout was expected to be low, reflecting a lack of public enthusiasm for the contest that was evident throughout the campaign.

The poll was conducted among 4,365 respondents outside 160 polling stations across the country on Friday, and its accuracy is estimated at +/-1.5 per cent.

Mr Casey, whose campaign was marked by criticisms of Travellers and their separate ethnic status, surged ahead of all the other challengers to finish with 21 per cent of the vote, the poll predicts.

Opinion polls in the early part of the campaign estimated negligible support for Mr Casey.

However, after his criticisms of Travellers, and his assertion that there was a growing culture of welfare dependency in Ireland, support appears to have surged towards Mr Casey in the final weeks of the campaign, with pollsters at some polling stations reporting he was attracting as many voters as Mr Higgins.

The other candidates all finished in single figures having made little significant impression on voters.

Seán Gallagher, who won half a million votes in 2011, failed to make any headway according to the poll, which predicts he will finish with just 7 per cent of the vote - some 22 percentage points less than his 2011 share of the vote, when he won 29 per cent.

But the biggest disappointment was probably for Sinn Féin, whose candidate Liadh Ní Riada won just 8 per cent of the vote, the poll predicts. This is a level far below Sinn Féin’s support at the last general election, and just a third of the party’s current support in the most recent Irish Times/Ipsos MRBI Opinion poll.

The expected result comes after a scrappy campaign that saw no candidate emerge unscathed. While Mr Higgins was never moved from his perch as hot favourite throughout, he shipped considerable criticism over his use of the Government jet, expensive hotel accommodation on overseas visits and the lack of transparency over how an annual €300,000 allowance for his office was spent.

Although Mr Higgins was often put on the defensive, especially during the debates he attended, none of the other candidates were able to turn Higgins’s discomfort into support for them, and the incumbent retained a huge lead throughout the campaign.

The breakout from the pack of challengers only came late in the campaign with Mr Casey’s criticisms of Travellers and aspects of Ireland social welfare system.

The referendum to delete the reference to blasphemy in the Constitution was, as expected, overwhelmingly passed, with the exit poll predicting 69 per cent of voters have backed the proposal, while 31 per cent have voted to retain the blasphemy provision.

Younger voters overwhelmingly backed deletion, while older voters were much more evenly split, with 48 per cent voting to retain the constitutional article as it currently stands.