Gavin Duffy: 'It’s time for a different type of president'

At the official launch of his campaign for the presidential election in Dublin, Dragons' Den panellist and businessman Gavin Duffy pitched himself as the candidate who would be best equipped to face the challenge of Brexit. 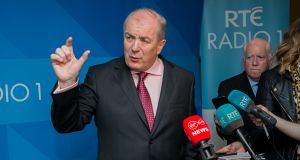 Presidential candidate Gavin Duffy calculated his campaign would cost €300,00 and he would fund it from his own resources.. Photograph: Gareth Chaney Collins

Presidential candidate Gavin Duffy has said he has no issue with tax, with bad debts or with company laws during his business career.

At the official launch of his campaign for the presidential election, the Dragon’s Den panellist and businessman said he was very proud of his record of compliance in his 30-year career.

“I am saying here you will not find anything in my track record. I know in my business there never has been a tax issue, a bad debt issue, I have never been involved in litigation.

“It’s not to say there have not been difficulties, I just don’t see litigation as a (route to take).”

He also said he did not think he ever fell out with a business colleague.

In saying his record was clean, Mr Duffy also referred to any questions that might relate to his personal life. Turning to his wife, Orlaith Carmody, he said: “A big consideration for us entering the race, was their anything in our personal lives that could embarrass our children? There is not.”

Mr Duffy launched his campaign on Tuesday in a business centre in Smithfield, Dublin, surrounded by supporters and family. In his initial remarks, he very firmly pitched himself as the candidate who would be best equipped to face the challenge of Brexit and uncertain economic times.

‘It’s time for a different type of president who will be able to face those challenges,” he said.

Pointing out that Brexit is scheduled to happen in 180 days time, he said it was a symptom of a bigger phenomenon, nationalism and isolationism, evident in both the UK and in the US.

“We are seeing now the growth of a new form of nationalism coupled with isolationism. It is happening with our two neighbours, east and west. the UK and US

“The fallacy is you keep immigrants out it is good because they fear immigrants will take their jobs.

“The (other) big challenges are the rapid advances we will face in the next few years from artificial intelligence, from disruptive technologies and robotics.

“There will be millions of redundancies. You lose workers, you lose income tax. You don’t tax the robot.

“How can a modern society maintain the social services we aspire to?”

He said he could harness what he called the “soft power” of the presidency to deal with Brexit and achieve other goals in the next seven years.

Among the key pillars of his campaign are a youth corps that will go to developing countries; a campaign against childhood obesity; embracing diversity; leading trade missions abroad; and stamping out cyberbullying.

“I want a national dialogue on the type of society we will have for the second 100 years of our freedom,” he said.

“I am ambitious for Ireland. I believe Ireland can achieve its full potential. I know we can do more to achieve more.”

He said he calculated his campaign would cost €300,00 and he would fund it from his own resources. He denied he was a mouthpiece for the establishment, or a proxy Fine Gael candidate.

Asked about consultancy work he had done for businessman Denis O’Brien in the wake of the Moriarty Tribunal, he said he had done 40 hours of work for him in 20 years and had billed him for a total of €18,000. Under repeated questioning, he refused to disclose the nature of the advice, citing grounds of confidentiality.

Asked about his public service record, and about the charge that those entering the race are wealthy business people, he asserted that just because of their status that should not mean they should be excluded.

“Are we saying that we can only have people in some of these positions if they have never worked in the real world.

That seems to be the tenor of what’s emerging in this election and that concerns me slightly.”

Asked would he seek a second term he gave an indeterminate response: ”I think seven years is long enough for anybody in any job. You’ve either delivered at that stage or not.”

However, he then added he would make up his mind about a second term after six years, if elected.