All 40 schools built by Western Building Systems to be inspected 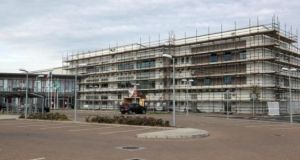 The Taoiseach confirmed in the Dáil that litigation was underway against the company in respect of four schools including Ardgillan Community College in Balbriggan, Co Dublin in relation to fire safety issues. Photograph: Collins

He confirmed in the Dáil that litigation was underway against the company in respect of four schools, including Ardgillan Community College in Balbriggan, Co Dublin in relation to fire safety issues.

They will assess developments in relation to structural problems in the schools.

“But if the company hasn’t built these schools up to standard it is the intention to pursue the company in the courts for that as well.”

Mr Varadkar said about 40 schools would be assessed during the Hallowe’en break and “it is anticipated to be completed by the middle of November”.

He told Sinn Féin Dublin Fingal TD Louise O’Reilly that some schools would have to be partially or entirely closed and in others it might be possible to conclude temporary measures and complete the work over the summer holidays.

The Taoiseach added: “It does certainly appear to me that corners were cut back in the Celtic Tiger period when it comes to the building of some of these schools which is truly disgraceful in my view.”

He said that for the past couple of years “a clerk of works is present on site every day when a school is being built to make sure it’s up to standard, but it certainly appears to us that prior to 2014, 2015 schools in the Celtic Tiger period were built without proper oversight”.

Later, Minister for Education Joe McHugh told the Dáil that the health and safety of students and staff was paramount and the 40 schools had been contacted on Tuesday.

Mr Mc Hugh said there would be an assessment of all 40 schools built by Western Building Systems including those constructed after new regulations came into place two years ago.

He said following an assessment on Tuesday, Tyrellstown Educate Together National School and St Luke’s National School - which share a campus and have a combined enrolment of more than 1,200 pupils, were closed as a safety precaution.

The Department’s target was to have interim accommodation in place when they return after the Hallowe’en break.

The Department will fully brief all opposition spokespeople about the issue on Wednesday, he said.

Fianna Fáil education spokesman Thomas Byrne said Western Business Systems were still looking for contracts but they should not be given any.

Mr McHugh said he had spoken to the Attorney General and talked about future contracts. He said he personally could not stand over a situation where students and teachers’ lives were put at risk.

The Minister said they would establish a chronology of what schools would be assessed first.

Parents would be kept informed and he acknowledged the disruption that would be caused to so many people’s lives.

The schools were built under a fast track system introduced over a decade ago before stricter regulations were put in place in 2014.

Mr McHugh said “there are serious questions as to how these buildings were allowed to be built in such a short period of time”.