Michael D Higgins and the Government jet: how the story took off 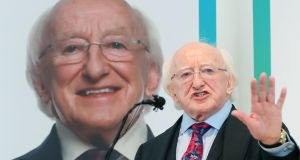 President Michael D Higgins: ‘As far as I am concerned, I am very happy with the official PSNI statement. I welcome it, I agree with it, and I am happy to reciprocate to it by again expressing my thanks for their co-operation and courtesy.’ Photograph: Niall Carson/PA

Presidential use of Government jet raised on October 13th: The use of the Government jet by President Michael D Higgins for a 165km  trip from Dublin to Belfast first emerged as almost a throwaway remark in the first presidential broadcast debate 10 days ago.

The question was brought up by Peter Casey during the radio debate hosted by Cormac Ó hEadhra RTÉ Radio one on October 13th.

“You take a Learjet to go up to Belfast for goodness sake, that’s the sort of nonsense that shouldn’t be allowed,” he charged.

“You could explain the entourage you take with you when you are doing your foreign junkets and you praise foreign dictators,” he added.

Higgins did not reply directly to the question. In fact he responded to a question that was never asked. He replied that in his seven years as President, he had the use of a helicopter on only 14 occasions. He did not mention the jet.

The issue was not pursued during that debate.

The Belfast trip: The President and his wife Sabina, accompanied by others, flew from Dublin Airport to Belfast City Airport on the morning of May 29th. His official car travelled separately.

Higgins delivered a lecture at 11.30am in Queen’s University to commemorate the 20th anniversary of the Belfast Agreement. The lecture is named after Harri Holkeri, the late Finnish prime minister, who was involved in the peace process.

The President and his wife and their delegation flew back to Dublin along with their advisers. The official car was driven back separately.

The 156 km trip by car would have taken one hour and 54 minutes each way, according to Google Maps. Taking flying time, and the journeys to and from airports, the President probably saved about 50 minutes each way.

The only other public event marked in his diary was for later on that evening, where the President attended the final of the Dublin International Piano Competition in the National Concert Hall.

If there was no intervening event, the delegation should have had enough time to return to Dublin for the 7pm concert.

Michael D Higgins and the government jet: The government jet is a Learjet 45, which has a seating capacity of nine. It costs an estimated €3,780 per 60 minutes of flying time.

It has become standard for government Ministers to publish full details of their use of the jet.

However, it is long-standing Government policy to refuse to share any details of the President’s use of the Government jet, or of the size of the entourage from Áras an Uachtaráin

He has taken an estimated 50 trips abroad during his presidency. For many of the trips, he and his entourage travelled with commercial airlines, but there is no information available on the total number of times he has used the jet.

Some information of the President’s use of the jet has emerged as incidental information to news reports over the years. He used the government jet twice during the Euro 16 soccer championship, flying to Paris on June 11th, 2016 to attend the Republic of Ireland versus Sweden game and travelling to Lille on June 26th to attend the game against Italy.

He used the government jet to fly to London in 2014 for the historic State visit, when he met Queen Elizabeth. The government jet was sent to Italy in February 2013 to bring the President home to allow him scrutinise the rushed legislation that put an end to the promissory notes for bank debt.

One newspaper report earlier this summer stated the President had used the jet 25 times since the beginning of 2017.

It is known that he has used it at least four times this year. Besides the Belfast trip in May, he was flown on the Learjet to Athens for a three-day State visit in February. In the same month, he used the jet for a two-day visit to London.

And in February he also used the jet for a two-day trip to Dingle and to Valentia Island. He flew into Farranfore Airport on February 16th. The jet returned to Dublin and flew to Kerry the following day to collect the presidential party.

Big Debate questions on October 17th: The next time the question of the President’s Learjet flight to Belfast came up was last Wednesday night during the Pat Kenny’s Big Debate on Virgin Media One.

During questions on expenditure by the Áras, Higgins was asked by Kenny what was the need to take a jet to Belfast.

Higgins claimed his staff had been advised “that for security reasons I couldn’t be picked up at the Border” to be escorted to Belfast.

He said on the programme he was “perfectly happy” to drive to Belfast from Dublin, but did not do so on that occasion because of security advice.

He also referred to a recent speech he had given in Derry, which he had driven to from Dublin.

Later in the week, in an impromptu session with reporters, Mr Higgins said that ahead of trips to Belfast, his office takes part in consultations with the PSNI “about where they will pick me up”.

He said there was an issue on the day.

He justified the use of the Learjet on the day in terms of his schedule: ”This was in fact the only way I could do it in time.”

PSNI sources contradict the “security” reasons: Over the weekend, senior sources in the Police Service of Northern Ireland dismissed any suggestion that the President would have to take a flight because of his security not being picked up at the Border.

The sources said it was “inconceivable” that the President’s security needs would not be fully met.

Assistant Chief Constable Alan Todd gave the official PSNI response: “It is a long-established policy of the PSNI not to comment on the security arrangements made for individuals.

“The PSNI routinely work with visiting heads of state and other key figures visiting Northern Ireland and make full provisions for their safety in line with their requirements. We have nothing further to add at this time.”

The message could not be clearer – full provisions for the safety of visiting heads of state were always made.

The explanation shifts subtly on October 22nd: During a campaign trip to Drogheda on Monday, the President was asked about the comments of the PSNI, which suggested there were no security issues around a pick-up at the Border.

“I have visited Northern Ireland many times in the last seven years, and I take the advice from my office and my office judges these trips in terms of . . . logistics and security,” he replied.

So the advice had not emanated from the North, but from his own office. This had not been made clear last Wednesday.

He also said: “As far as I am concerned, I am very happy with the official PSNI statement. I welcome it, I agree with it, and I am happy to reciprocate to it by again expressing my thanks for their co-operation and courtesy.”

The change of emphasis in his reply led to immediate criticism for his rival. Sean Gallagher asked why anyone would take a jet for such a short journey “up the road” and claimed the pattern on expenditure was “not a good one”.

On Tuesday morning, Taoiseach Leo Varadkar jumped in to defend the President’s use of the jet: “On occasion the jet is used for travel to Belfast and Derry and that can be done for different reasons. It’s often done to save time, it may save two hours on a Belfast trip or four hours on a Derry trip. That’s not a case of getting home earlier, it’s a case of being able to fit in more functions very often.

“I know there’s an understandable public concern around the cost of using something like the jet. But bear in mind the plane is owned by the Government, the pilots are paid anyway and we had a very strange situation during the recession when it was actually being flown around empty because the pilots have to keep up a certain number of flying hours and the added cost is actually very small and there’s obviously security costs associated with going by land as well.”

Higgins had used the same line of argument as Varadkar, when he was asked in New York earlier this year about use of the jet.

He said that using the jet might allow him to attend six functions on a trip rather than three.

He said the Air Corps pilots needed to clock up the hours in any instance to retain their licences, irrespective of having passengers aboard.

The issue is likely to be a dominant one during tonight’s PrimeTime debate on RTÉ 1, the final broadcast debate involving all candidates before voting on Friday.