Presidential debate: ‘I like the cut of that empty podium’s jib. It has a quiet dignity’

Patrick Freyne: You could argue that it would be better to run a Rose of Tralee-style pageant 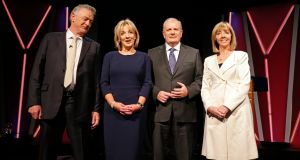 Is there a point in having a television presidential debate when the incumbent isn’t there? This is the philosophical question of the political age.

Michael D Higgins won the last election by being relatively uncontroversial during debates and he seems to be planning to win this one by not turning up. Sean Gallagher is similarly absent (in protest).

The other candidates arrive in this order Peter Casey, Liadh Ní Riada, Gavin Duffy and Joan Freeman. They’re all appalled at the no-show candidates. “Ach, I don’t think [Michael D]would have added a great deal to the debate really,” says Casey. “I think he’d have been on the backfoot all the time trying to explain how he spent €10,000 grooming his dogs.”

He talks about the serving President taking a learjet from Dublin to Belfast. “I can drive faster than he can get there in a learjet,” he says.

Liadh Ní Riada is also only candidate here with the backing of a political party, which makes me wonder what’s wrong with the job. Is it a trap?

He seems very relaxed. “I’m one of nine children. There was never a meal without an argument you know.”

The candidates are, after getting their makeup done, aligned in tiny mirrored dressing rooms, that are, in Liadh Ní Riada from Sinn Féin’s words, “the size of a cupboard.” She is also appalled about the absent candidates. “[Sean is] absent tonight but he’s been absent for seven years in reality when you think about it,” she says.

They gather in the studio for a photo and are joined by Claire Byrne. “I should have gone for the nomination,” she says before, a little later adding: “Can we go? I have to go read the constitution.”

Businessman Gavin Duffy looks nervous. “I would say its daunting,” he says. “It’s a different type of engagement than appearing on a TV show or doing an interview. You’re going in to debate in an election and it is a bit of a battle.”

Twenty minutes later the battle begins. Claire Byrne emerges like a latter-day Tina Turner in Mad Max Beyond Thunderdome, albeit a Tina Turner in a sensible trouser suit. It was initially reported the absentees would be represented by empty podiums but that’s not true. (It’s probably just as well. The people are fickle: “I like the cut of that empty podium’s jib,” they’d say. “It has a quiet dignity. I’m voting for the empty podium!”)

Peter Casey starts by sticking the boot in to Michael D’s expenses (later in the show Claire Byrne has to quote a spokesman completely refuting Casey’s allegations regarding presidential dog grooming) and by expressing his disappointment that the “Fianna Fáil candidate” didn’t turn up (Sean Gallagher is not the Fianna Fáil candidate by the way). He goes onto talk about building a platform for the diaspora.

Gavin Duffy is a “believer in Ireland” (refusing to believe in the the state would be an interesting policy platform) who wants to start a youth corp and to tackle childhood obesity. Joan Freeman talks about a grass-roots presidency and about the importance of volunteerism. Sinn Féin’s Liadh Ní Riada laments the “cosy consensus” and talks about being a president for marginalised people (She is also only candidate here with the backing of a political party, which makes me wonder what’s wrong with the job. Is it a trap?).

The campaign has been marked by presidential aspirations that have been completely outside the remit of the job. “I will help with Brexit!” “I will prepare for a united Ireland! ” “I will send an expeditionary force to find the Jade Monkey!” “I will put an end to that pesky Penelope Pitstop!”

So at one point Claire Byrne gives them a spot test on the constitution and at another they’re asked to discuss the largely ceremonial nature of the job. Casey says the president is “the influencer and chief.” Liadh Ní Riada talks about “pushing out the boundaries” of the presidency. Joan Freeman talks about the office’s power “to persuade and influence.” Gavin Duffy talks about an “evolving presidency.” Yum! Lovely gibberish.

What else do we learn? We learn they would all meet with Donald Trump in order to take him in hand and put him straight. They largely agree with neutrality though Peter Casey seems to be arguing against it and starts talking about helicopters (I can’t remember how this came up).

There are a few sideways digs. Joan Freeman references Gavin and Peter’s wealth and notes how difficult it is to run without a lot of money or party backing (“One almost feel you have to apologise for [begin a millionaire],” says Gavin Duffy). Ní Riada refers to the controversial €120,000 loan Joan Freeman received from an American ex-boyfriend.

Claire Byrne then asks about the nastiness of the campaign and notes that Michael D has said he has no privacy anymore. “I think he has [privacy] because he’s not here tonight,” says Freeman.

The best bit is when someone starts shouting from the audience and they have to take a quick break.

I learned very little. Debates do not feel like the best way of choosing a head of state. Very little of what constitutes political campaigning is particularly presidential. Nobody really wants a fighty president whose first words to a visiting dignitary are, “Let’s wrestle!”

Furthermore, in absentia Michael D becomes a sort of Tyler Durden figure and having the others debate in his absence is sometimes like watching Edward Norton punch himself in the face in Fight Club.

You could argue that it would be better to run a Rose of Tralee-style pageant in which each candidate competes to give the best wave, deliver the firmest handshake, cut the best ribbon or smile most winningly at a royal. There could even be a category for pets so that Michael D’s dogs could compete against the falcons, lynxes and albino leopards that I presume Peter Casey owns.

Instead it was a bit of a slow-moving quiz show for the viewers at home, who, in this instance, happen to include Michael D Higgins and Sean Gallagher. Maybe they watched it together.