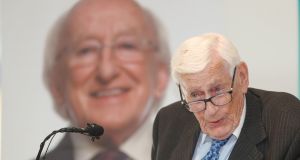 Former Northern Ireland deputy first minister Séamus Mallon has blamed Brexit and a “limping British government” for the breakdown of relations between the Republic and Britain, saying the relationship has “almost disappeared”.

The SDLP veteran was the guest speaker at a presidential election campaign event with President Michael D Higgins in the Droichead Arts Centre in Drogheda, Co Louth, on Monday.

“It has chosen not to copper-fasten that relationship with the island of Ireland but to replace a sovereign Irish government with eight members of the DUP.”

The “Shared Ireland, Shared Island” initiative is the third of three such initiatives the President has promoted during his re-election campaign. It follows on from “Achieving Equality” and “Imagining the Nation”.

While saying he was constrained in his campaign due to his role as President, Mr Higgins said he wanted his new initiative to “spark an inclusive, respectful discussion on how all of us can live together and how we can treat our differences with respect”.

He added: “In our interpretation of the past, we do so in a way recognising that it bears on how we are living in the present and what we might do together in the future.

“We must differ, yes we will differ, but we must do so with the necessary courtesies of a republican discourse.”

Mr Higgins said that, if successful in his re-election efforts, he will invite “thinkers from various backgrounds, communities and cultural groups to Áras an Uachtaráin as part of this initiative”.

“I will work to unite all our people and deepen our warm relationships with the communities of Britain, Europe and the wider world.”

Sinn Féin candidate Liaidh Ní Riadha said: “He claims that it was for security reasons. We now know that the PSNI have come out and disputed that and that needs to be accounted for”.

Seán Gallagher speaking in UCD said “a pattern is beginning to emerge now of extravagance in the office of the president and the answers now are coming disguised in we have to hide behind security”.

Speaking to journalists in Drogheda Mr Higgins said he followed the advice of his office when it came to travel decisions.

“I take the advice from my office and my office judges these trips in terms I think of the considerations that they take into account are logistics and security,” said Mr Higgins.

Handgun and €300,000 worth of cocaine seized by gardaí in Dublin 15:52
Limerick publicans relieved to open but on alert for Covid-19 threat 15:51
Puppy seized and rehomed while owner in psychiatric facility, court told 15:50
Dublin farmer discovers overnight rave on his land 15:36
Two Co Donegal men found not guilty of Sydney murder 15:12