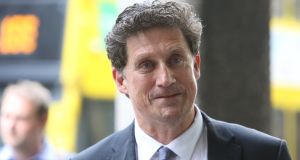 Lorna Bogue claims she was suspended from the Green Party because her criticisms about party leader Eamon Ryan (above) were put to him on Prime Time. Photograph: Gareth Chaney /Collins Photos

Green Party headquarters has rejected a suggestion by a Cork councillor she was suspended because her criticisms about party leader Eamon Ryan were put to him on an RTÉ current affairs show.

Lorna Bogue said on Wednesday she was temporarily suspended from the party the morning after a Prime Time programme where Mr Ryan was asked about an article where she described his handling of government negotiations as a fudge.

Asked if she had been suspended as a result of her comments being put to him, she said, “The events would imply things like that. I have to be careful here. I’m still none the wiser.”

A party spokesman denied the suggestion, saying Mr Ryan had never made any complaint about, or initiated any action against, or questioned the right of, any Green member to comment in the public domain during his time in the party.

The spokesman said the temporary suspension was based on a number of issues, including a complaint made about comments she had made on internal WhatsApp messages.

Interviewed by Sarah McInerney on RTÉ radio, Ms Bogue said that in the WhatsApp groups “the way female members had been treated was very unkind”. She said those comments formed the entire basis of the complaint.

That was disputed by the party, which said the complaint from another party member was more substantive than that, and was not based solely on the comment as related by Ms Bogue on the radio.

That issue is now the subject of an internal inquiry within the party.

Ms Bogue also said one person on the party’s executive council had argued against lifting her suspension. Mr Ryan is a member of the council.

“You don’t have to be Colleen Rooney to figure out what was going on here,” she said.

Ms Bogue also contended there was sexism in the party and it would not allow her as a young woman to have an opinion.

She said once she began speaking against the grain, a “witchhunt” had begun.

In response, the party said it had always strived to give equal weight to female and male voices, and was concerned and saddened to hear allegations of sexism within the organisation.

“The majority of senior officer roles in the party are held by women. The the ratio of male and female representatives in the party is close to 50/50,” it said.

This comes as the party has been riven by an increasingly bitter internal debate over the decision to negotiate a programme for government with Fianna Fáil and Fine Gael, where many of its members feel hurt and victimised.

Dublin councillor Peter Kavanagh said he had a very positive conversation with Mr Ryan on this issue this week: “I did say this is something we need to move on [after the coalition issue is decided] and bring the team together. This is a membership-focused party.”