Some doctors doing private work when they should be in public hospitals, Varadkar says 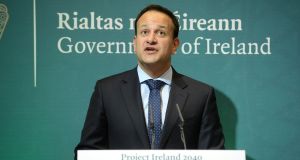 Taoiseach Leo Varadkar has defended the use of private investigators to ‘spy’ on medical consultants in response to a pay claim case being taken in the High Court. Photograph: Dara Mac Donaill/The Irish Times.

The Taoiseach has defended the use of private investigators to “spy” on medical consultants in response to a pay claim case being taken in the High Court.

Leo Varadkar said any medical consultants “moonlighting” in a private hospital when they are supposed to be working in a public hospital are in breach of their contract, damaging the interests of patients and taking taxpayers’ money.

Approximately 700 consultants have taken a legal challenge to the State’s decision to withhold pay increases agreed under a 2008 contract.

As a result of the matter being before the courts, the Taoiseach told the Dáil he was limited in what he could say. However, he said negotiations had begun on a settlement that could satisfy the State and the consultants.

Mr Varadkar was responding to Fianna Fáil leader Micheál Martin who accused the Government of hiring the investigators to “spy” on consultants to fight the pay claim.

He said “this sets a very sinister and dangerous precedent” and that ministers and their departments should not be ordering surveillance, which he described as a potential abuse of power.

Referring to a Sunday Business Post article which said the Cabinet in February decided to pursue the strategy, Mr Martin said the Departments of Health, Finance and Public Expenditure authorised surveillance of 10 consultants.

He asked would it be ESB workers or bus and rail workers that were monitored next and queried if the Government thought it “ can wilfully ignore the Data Protection Act”.

“Just because RTÉ’s PrimeTime engaged in surveillance, did that mean the Government should too?” he asked.

Mr Varadkar insisted that the use of surveillance and private investigators was not unusual. Revenue inspectors, for example, were “counting the number of chip bags” coming out of a chip shop to see whether the owner was complying with tax laws, he said.

The Taoiseach also said “it is not unusual to use investigators to see if people are genuinely disabled if they are in receipt of disability benefit”.

He said RTÉ’s PrimeTime, which did a report on the activities of three consultants, “did the country a service to follow some consultants who are breaching their contracts”.

He said consultants in breach of their contract were damaging the interests of patients who faced long waiting lists for treatment, and they were also wrongfully taking money from the taxpayer.

He had “no reason to have any concern that patient data was compromised” and he said there was no ministerial involvement with the execution of the strategy.

The Taoiseach pointed out that “the whole case the consultants made is that the State breached their contract.

“What sort of case do they have if it turns out that they actually breached their own contract?”

He said consultants were taking a case that they deserved compensation “hundreds of thousands of euro, perhaps millions, for each individual consultant at the expense of the taxpayer.

“If your case is based on the idea that the State breached your contract you don’t have a case if you’re the one who broke your own contract as well.”