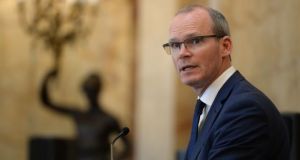 Any eventual agreement needs to be “weather-proof”, according to Tánaiste Simon Coveney. Photograph: Cyril Byrne

Tánaiste and Minister for Foreign Affairs Simon Coveney has described the latest UK ‘backstop’ proposals as “a step forward”.

Yesterday the British government published its proposal on the ‘backstop’ policy to avoid a hard border on the island of Ireland.

It proposes keeping the whole of the UK in conformity with EU customs regulations — not just Northern Ireland.

This would continue until a permanent future relationship between the EU and the UK is negotiated.

Mr Coveney told RTÉ’s Morning Ireland that the latest UK proposal addressed two key issues – customs and regulatory alignment. He said that there was not a need for a full proposal on both aspects by the original deadline of the end of June.

Any eventual agreement needs to be “weather-proof” and robust and to protect the EU. Northern Ireland cannot be a backdoor to the EU, he said.

The Tánaiste described yesterday’s proposal as “a temporary arrangement until something better can be agreed.”

“This paper deals with the customs issue, yes it is half the story, we recognise that more work needs to be done. It’s a step forward.”

Meanwhile, British Labour politician Hilary Benn, who is Chair of the Exiting the European Union Select Committee, maintained that the ‘backstop’ plan “is only half the answer” to the problem of cross-border business.

He told RTÉ’s Today with Sean O’Rourke show that “brutal reality” is now “intruding” on the British Cabinet.

The ‘backstop’ will remain in place until some other agreement is put in place with no checks and no infrastructure. The timeline is aspirational, he added.

A softer Brexit is now inevitable, said Mr Benn. “But it is taking a long time. British businesses are losing patience.” Too much time has been wasted, he said. “Now reality is beginning to intrude.”

The most important thing now was to minimise the impact of Brexit on British businesses, he said. “We need to keep open borders.” “If the government is incapable of doing its job, then it will fall to parliament to provide that leadership.”