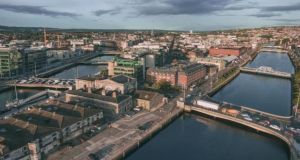 Householders transferring to the Cork City Council area will continue to pay property tax to Cork County Council until the end of 2019. File image: Getty

At their Cabinet meeting on Wednesday, Ministers approved a memorandum brought forward by Minister of State for Local Government John Paul Phelan to realign the local authorities in Cork, and to begin the process of merging the two councils in Galway.

Under the proposals, the geographical area of Cork City Council will effectively double and the population of the enlarged local authority will increase by 100,000.

In his memo, Mr Phelan outlined that a process will begin that would allow the city council make financial settlements to the county council in relation to lost revenue on commercial rates and property tax. In addition, both councils will be expected to work out how functions and staff will be transferred to accommodate the new arrangement.

In the absence of an agreement, the Minister will have reserved powers to effectively force the changes.

The financial resolutions will come into effect on January 1st 2020. That will mean that householders transferring to the city council area will continue to pay property tax to Cork County Council until the end of 2019.

Proposals to merge the two councils in Galway have met with some opposition locally but the decision was widely expected, given that similar amalgamations have happened in Limerick and Waterford.

The change follows from the report of an advisory group chaired by Professor Eoin O’Sullivan of TCD, himself a native of Galway City. The group recommended a merger, pointing out that the growth of Galway city had effectively come at a cost to county towns, which no longer had the capacity to collect commercial rates at a sustainable level

The Government decision means that an administrative merger of both councils will begin immediately, with a chief executive being appointed for the new entity.

The Government has agreed that both councils will remain separate electoral entities for the 2019 local elections. However, the electoral amalgamation of both will take place no later than the end of 2021.

That means that a total of 57 councillors (39 in the county; 18 in the city) will attend the combined council meetings until the local elections in 2024. It is expected the number of councillors will be reduced for the 2024 elections.

Mr Phelan told The Irish Times that the decision on Galway had come on the back of a unanimous report from a committee, comprised mostly of people from the county.

“The most telling thing is that committee has sat for four or five years and was unanimous at all stages. They believe the merger is the best way of driving Galway forward.

“As for Cork, the Government today took the first step in implementing a change that will benefit the county as a whole and see two strong councils.”