CervicalCheck: All women affected to receive €2,000 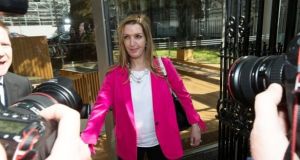 The Government has agreed to provide an immediate ex-gratia payment of €2,000 to each woman affected by the CervicalCheck controversy.

The Cabinet on Tuesday discussed a progress report by Dr Gabriel Scally, the chair of an independent scoping inquiry, into the matter.

It agreed to accept Dr Scally’s proposal to provide money to each of the 209 women and to the next of kin of any women who has passed away.

The payment is aimed at removing financial obstacles to those affected from participating or making their voices heard in relation to the inquiry.

Minister for Health Simon Harris said this would not prevent compensation being provided to the women affected.

He said: “Following the approval of Government, I am making arrangements for the ex-gratia payment as recommended by Dr Scally. This payment relates to addressing any financial obstacles women might encounter in having their voices heard as part of his work.

“It would not be a bar to further payment in due course. I have also requested Dr Scally to identify arrangements that he could put in place as part of his inquiry to undertake the process of structured conversations.

The report also recommends reforms to the information receive when going for screening, including explicit warnings about the limitations of the tests.

Dr Scally also proposes a consent form should be provided guaranteeing that women will have full and open access to their cervical screening record on request.

This is not the final report and is merely a progress update on what he has identified so far. The report states much of the documentation it requested was only provided to the inquiry time in recent days. More than 4,000 items of correspondence were sent to Dr Scally between June 6th and 8th, a month after the investigation was established.

The inquiry will therefore not be completed until the end of the summer.

Mr Scally was due to complete his report at the end of the month when he will recommend if a commission of investigation is necessary.

However, it is understood it is delayed because he has not spoken to the majority of people involved as he wishes them to come forward on a voluntary basis, rather than being compelled to participate.

The inquiry requested those affected to make contact but it is believed less than 30 have done so to date.

Mr Scally is now examining ways as to how he can make contact with all of the 209 affected by the end of the month and may hold a number of meetings across the country.

This will be the focus for the second phase of his report it is believed but will lead to a delay in his findings being issued.

The terms of reference for the inquiry including examining the level of knowledge within the Health Service Executive about the policy of non-disclosure and why patient information was withheld from them.

It also examined the information provided to women using the CervicalCheck service, and why the policy of open disclosure was not implemented.

It will also examine and the tendering, contracting, operation, conflict of interest arrangements, performance information and performance management of the scheme.

The controversy came to light after terminally ill Limerick woman Vicky Phelan settled a High Court action last month after her cancer was missed in a smear test three years before she was diagnosed.

The missed smear test was only discovered in 2014 after her diagnosis but she was not told until 2017.

A follow-up HSE investigation found that 209 women who were diagnosed with cervical cancer were not told about subsequent audits showing past smear tests could have provided a different outcome.