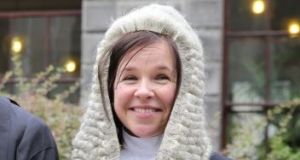 Criminal lawyer Tara Burns, currently counsel to the former Garda press officer Dave Taylor at the Disclosures Tribunal, has been nominated for appointment to the High Court. Photograph: Collins Courts

The Cabinet has approved the nomination of three Court of Appeal judges and one judge of the High Court at its meeting on Wednesday.

High Court judges Marie Baker and Brian McGovern have been promoted to the Court of Appeal and will take up their positions when formally appointed by the President shortly.

In addition, Judge Patrick McCarthy will be appointed to the Court of Appeal on July 2nd, following the retirement of Judge Alan Mahon.

Leading criminal lawyer Tara Burns has been nominated for appointment to the High Court. She is currently counsel to the former Garda press officer Dave Taylor at the Disclosures Tribunal.

The appointments come after an unprecedented plea by the new President of the Court of Appeal, Mr Justice George Birmingham, for more judges to be appointed.

Mr Justice Birmingham made his comments last week, on only his second day in his post, after he was forced to postpone a number of appeals due to be heard this week due to a shortage of judges.

Minister for Justice Charlie Flanagan is believed to have told his colleagues that the appointments were “essential” for the administration of justice. It is understood that more appointments to the High Court are likely in the near future.

Minister for Transport Shane Ross, who has blocked the appointment of judges temporarily in the past because he is pressing for changes in the way judges are appointed, assented to the decision today.

Mr Ross did not respond to the request for comment through his spokesperson.

However, tensions continue in Government over the vexed issue of judicial appointments, and it is understood there was a series of exchanges between Mr Ross and the Mr Flanagan in recent days.

Legislation demanded by Mr Ross which will reform the way judges are appointed is winding its way slowly through the Oireachtas but Mr Ross has privately expressed deep frustration with the pace of the process, and has voiced concern that he is being “strung along” by Fine Gael, according to Government insiders.

Mr Ross has repeatedly threatened to block judicial appointments until the new legislation is passed and operational and has on a number of occasions caused nominations to be delayed by weeks.

However, three things have diminished Mr Ross’s sway - the pressing need for more judges in some courts, without which court business has been seriously affected; the lack of support for Mr Ross among his Independent Alliance colleagues, who have made it clear to him and to the rest of their Government colleagues that while they support Mr Ross, they are not prepared to make it an issue which threatens the future of the Government; and the advent as Minister of Charlie Flanagan, who is of a less patient nature than his predecessor Frances Fitzgerald.

Mr Flanagan has made it clear that if the courts need judges, he sees it as his responsibility to bring nominations to Government.

Recent weeks have seen progress on the Judicial Appointments Bill, which finally passed through the Dáil last week, and will now make its way to the Seanad

The bill will set up an independent body to vet candidates and propose their appointment to the Government.

However, the Government lost votes on a number of amendments to the Bill, and it is now expected to seek amendments overturning these in the Seanad.

When that happens, it will have to return to the Dáil for final approval.

One TD closely involved in the process said there was little prospect of the Bill passing through the Oireachtas by the summer, as Mr Ross had previously insisted.