Q&A on Brexit: so what did London propose?

And what exactly is this ‘backstop’ solution that people are talking about? 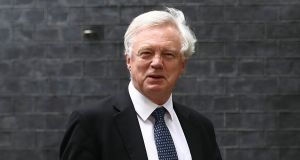 UK Brexit secretary David Davis, a hard Brexiteer who threatened resignation if the backstop was not time-limited. Photograph: Will Oliver/EPA

So what is this latest thing to have happened in all this Brexit business?

After months of awaiting a British response to the EU’s draft proposal around the “backstop” solution – a default plan to avoid a hard border in Ireland post-Brexit – London has suggested its own version of the plan.

To maintain an invisible border, the EU and UK agreed in a political deal last December that if they had not agreed a trade deal post-Brexit or other specific solution for the Border, then there should be a backstop maintaining regulatory alignment North and South to avoid customs checks.

Where does the Government stand on this?

Dublin is pushing hard for the backstop because, in the absence of a long-term trade deal (which will take years to negotiate) and an alternative solution (several of which have been suggested by the UK and rejected by the EU), this fall-back solution effectively maintains the status quo on the island of Ireland post-Brexit.

Did the UK approve of the EU’s suggested backstop?

Even though it agreed in principle to a backstop, London said that it could not agree to the EU’s proposed backstop because alignment would only apply to Northern Ireland and in effect establish a customs border between Northern Ireland and the rest of the UK. This caused alarm among the Democratic Unionist Party whose support is keeping Theresa May and her Conservative Party in power in the House of Commons.

So what is May’s government proposing now?

This backstop would, crucially for ardent Brexit supporters in May’s government and party, be limited in time. It would continue beyond the proposed Brexit transition period, when EU and UK will remain aligned, from the UK’s formal departure in March 2019 until December 2020. This would maintain frictionless trade between the EU and the UK and eliminate tariffs, quotas and customs processes on all EU-UK trade.

So how long would this time-limited backstop last?

May’s government has said the time-limited backstop will only apply, should it be needed, until a permanent customs arrangement is introduced and that it “expects” this to be in place by the end of 2021.

“Expects”? But what if the permanent plan is not in place by then?

That is where things get complicated, not just for the upcoming negotiations around whether the two sides can meet somewhere in the middle in time for a summit of EU leaders at the end of this month.

This is not a guaranteed cut-off date and the EU would likely reject that because it is temporary in nature, does not protect the EU single market and customs union, and because Brussels had rejected the idea of allowing the backstop to apply to the UK as a whole. But the fudged position keeps the Brexiteers happy because it ensures that the UK will not have indefinite membership of the EU customs union.

Why this time-limited backstop?

The temporary measure was agreed as a concession by May to quell a cabinet revolt by UK Brexit secretary David Davis, a hard Brexiteer who threatened resignation if it was not time-limited.

What does the Irish Government think of the UK proposal?

It welcomed the fact the UK has proposed something but it is still assessing it. Prior to the proposal, Taoiseach Leo Varadkar rejected the idea of a time-limited version of the post-Brexit backstop arrangement because, he said, the whole idea of a backstop was that it should apply until there is an alternative in place that maintains a frictionless, invisible border on the island. It should be an “all-weather” backstop, he said.

The formal response of the EU’s Brexit “task force” team of negotiators is awaited.