Across Europe and the world ‘there is the rise of us and them’, says former taoiseach 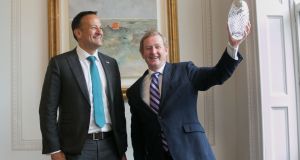 Taoiseach Leo Varadkar and former taoiseach Enda Kenny after Mr Kenny was awarded European of the Year in recognition of his contribution to Irish-EU relations, at the Shelbourne Hotel, Dublin. Photograph: Gareth Chaney/Collins

Former Taoiseach Enda Kenny has criticised the US Administration led by President Donald Trump, among other international governments, for populism and “aggressive nationalism”.

“Across Europe and the world there is the rise of us and them [and] the impeccable, calm logic of America or Hungary or Italy First,” Mr Kenny said, speaking after being presented by Taoiseach Leo Varadkar with the European of the Year Award by the European Movement Ireland.

“But there are still enough who know and celebrate the difference between patriotism and nationalism. How patriotism burns quietly, furiously in the human heart, how aggressive nationalism sets fire to decency, responsibility, memory, even humanity itself.”

He also spoke of the a “quantum change in geo-politics and economics” with an “emerging Russia and China” and “an America that is frequently unrecognisable”.