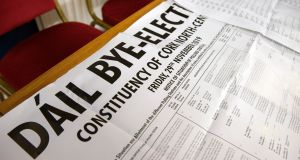 No one voted in one area of Bishopstown in Cork North Central in Friday’s byelection. Photograph: Provision

Turnout was expected to be low in the four Dáil byelections but in one part of Cork North-Central an expected low turnout became no turnout at all.

While votes came in from every other area, one box in a school polling station in Bishopstown was returned empty to the count centre after not a single eligible voter cast their ballot.

It was a first for Martin Harvey in his career as a returning officer.

“The box was in Bishopstown, an area that was kept in Cork North-Central after the city boundary extension earlier this year,” he said.

“There were 21 people on the register there to vote who were voting in Coláiste Spioraid Naoimh.

“When we opened the box we found that none of those entitled to vote there had actually voted. I have never across anything like that in my time as a Returning Officer. It is very unusual,” he said.

“I’ve not heard of that before,” concurred Trinity College emeritus professor of political science Michael Marsh.

Prof Marsh said it was a sign that “the election doesn’t matter very much. There have been other elections this year and people didn’t think it was a big deal.”

He too was surprised by the low turnout.

“I thought turnout would be low but it was a bit lower than I thought it would be,” he adds.

In fact turnout for Friday’s vote was the lowest recorded for a byelection with more than one in every two regular voters staying at home.

Ironically while one box in Bishopstown had no turnout, Cork North-Central in fact had the second highest voter participation of all four constituencies with 30.2 per cent turnout.

More Wexford voters turned out to cast their ballot than in any of the other three constituencies with 35.3 per cent of the electorate voting.

Just 25.6 per cent of the electorate voted in Dublin Fingal.

The previous lowest byelection turnout was 28.84 per cent in 1999 after the death of Labour TD Pat Upton, a contest won by his sister Mary Upton.

The four byelections were held to replace TDs elected to the European parliament.