Fianna Fáil on course to win seats in Cork and Wexford, Greens likely to win in Fingal 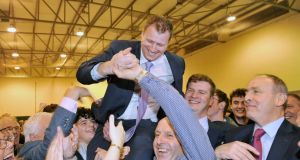 Fianna Fáil has won two seats and Sinn Féin and Greens took one each in the byelections held in four different constituencies on Saturday.

Sinn Féin’s Mark Ward was declared the winner in Dublin Mid-West in a remarkable result while in Cork North Central Fianna Fáil’s Pádraig O’Sullivan has held Billy Kelleher’s seat in the 10th count.

The Green Party’s Joe O’Brien won in Fingal when the result was confirmed shortly before 9pm.

The results mean Fine Gael has failed to win a seat and this further reduces the Government’s already flimsy majority on confidence votes in the Dáil.

With a confidence vote in the Minister for Housing Eoghan Murphy due in the Dáil on Tuesday evening, it means that the survival of the Government is now dependent on the votes of independent TDs who have no formal arrangement with Fine Gael; Denis Naughten, Noel Grealish, Peter Fitzpatrick and Michael Lowry.

The emerging results represent a blow for Taoiseach Leo Varadkar who had pinned his hopes on a win in Dublin Mid West, but a stuttering campaign and huge embarrassment in the party about Wexford candidate Verona Murphy’s comments about immigrants meant that these byelections were even harder than usual to win for an incumbent government.

Both the Taoiseach Leo Varadkar and the Minister for Finance Paschal Donohoe sought to play down the results, but there is little doubt that the results are a disappointment for Fine Gael, if not huge surprise for the party.

Fianna Fáil gained one seat with its victories in Wexford and in Cork North Central, where the vacancy was created by the election of Mr Kelleher to the European Parliament in May.

The Sinn Féin result in Dublin Mid West was built on an energetic local campaign and a strong get-out-the-vote operation yesterday, which confounded the pattern of record low turnouts elsewhere.

The other surprise poll-topping performance of the day was by the Green candidate in Fingal, Joe O’Brien.

The Greens Dáil ranks have increased by 50 per cent and encouraging the party to believe a Green wave is possible at next year’s general elections.

A clearly delighted Sinn Féin leader Mary Lou McDonald said on Saturday the votes for the party showed they were the “clear alternative” to Fine Gael and Fianna Fáil.