Low byelection turnout means lessons must be looked at cautiously

Analysis: Lack of interest among voters apparent as Fianna Fáil, Greens enjoy day in the sun 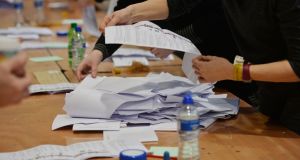 More than one in every two regular voters stayed at home. Photograph: Alan Betson/The Irish Times

The strongest theme emerging from the four byelections counted on Saturday was the lack of interest among voters, with turnouts at less than half the rate of general elections.

More than one in every two regular voters stayed at home. That means that extreme caution should be exercised when drawing lessons for the next general election.

But there are some signposts, all the same, among those voters who turned out. The first was that Fianna Fáil had a good day, winning the two seats it expected, its best byelection day since 1996.

Its performance in Dublin was less stellar, with Lorraine Clifford-Lee’s self-inflicted wounds hampering her chances of maintaining a real challenge. In Mid-West new candidate Shane Moynihan put in a decent performance, but no more than that.

On the measure that the party leadership really cares about – putting foundations in place for the general election – Fianna Fáil’s performance suggests it can hold what it has and possibly gain an extra seat in Wexford with new TD Malcolm Byrne. A second seat in Fingal looks like an outside bet.

A good day too for Sinn Féin, who sprung a surprise in Dublin Mid-West with a thundering performance from Mark Ward. It ends a series of bad election days for Mary Lou McDonald, giving the party a much-needed shot in the arm. Holding two seats in the general election here will be a hell of an ask, but this is a good problem to have. It also performed well in Cork but less so in Wexford and Fingal.

A stand-out day also for the Greens, who took a seat in Fingal with Joe O’Brien. This was not a shock – he had been well-tipped – but the manner of his victory will encourage the party that the Green brand is strong enough to make contenders of candidates who would otherwise be also rans for seats at the next general election.

Yes, that appeal might only be bankable in urban middle-class areas but it brings a scatter of Dublin constituencies, where the party did so well at the local elections, into contention.

Labour will be disappointed to come home empty handed, but the party did decently in Fingal, in Cork and in Wexford. It already holds seats in Fingal and Wexford, though, and will need to increase its share of the vote significantly to win back a seat in Cork. Dublin Mid-West looks a stretch on these numbers.

And so to the Government party.

Fine Gael tried to put a brave face on it – governments don’t win byelections and all that – but this was a poor performance, made worse by poor candidate selection.

Questions have already been raised about the future of Verona Murphy as a general election candidate, and neither Taoiseach Leo Varadkar nor Minister for Finance Paschal Donohoe sounded enthusiastic when asked this evening. There will certainly be calls to replace James Reilly on the Fingal ticket.

However Fine Gael spins it, there will be fallout from these campaigns and results. An uncomfortable no-confidence vote in Eoghan Murphy looms on Tuesday. A winter of discontent in hospitals is well under way.

A few weeks ago, Leo Varadkar was basking in the glow of a Brexit settlement, his TDs urging him to go for an early election. That narrative has now changed and changed abruptly.