Friday's byelections: All you need to know about candidates, constituencies and issues 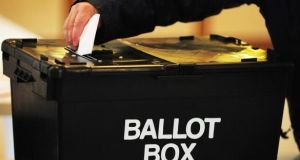 On Friday, voters in four constituencies will go to the polls to elect a handful of new TDs to the Dáil. Photograph: PA

On Friday, voters in four constituencies will go to the polls to elect a handful of new TDs to the Dáil. It comes after the election of four former members of the Dáil to the European Parliament, namely Independent TDs Clare Daly and Mick Wallace, Fine Gael’s Frances Fitzgerald and Fianna Fáil’s Billy Kelleher.

Here is the state of play in each constituency.

Much of the attention in this constituency has focused on a perceived two-horse race between Fine Gael and Fianna Fáil.

But with nine candidates in the race and uncertainty over how transfers will pan out, there are plenty of other parties in the mix.

Fine Gael’s candidate Verona Murphy, well known for her role as president of the Irish Road Haulage Association, caused controversy when she gave three interviews - including to the Irish Times - where she spoke of Islamic State being a big part of the migrant population and of children as young as three being “manipulated” by the terrorist group. She said some immigrants may need to be “re-programmed.” The party came under pressure to drop its support for Murphy. After her comments, she visited a reception centre in Waterford, told the asylum seekers who were present what she had said, and offered an apology which she says was accepted.

While the party roundly criticised her remarks, the campaign continued. Taoiseach Leo Varadkar was seen canvassing with Murphy in Wexford on Monday. Some party strategists believe she can still win the seat but others are adopting a wait and see approach, unsure of what effect the comments will have.

Byrne has been a councillor since 2009 and put in an impressive performance in the most recent EU elections, nabbing 69,000 first-preference votes.

He will be hoping that this experience stands to him on polling day.

The other candidates are as follows: Cinnamon Blackmore for Solidarity/People Before Profit; Jim Codd for Aontú; Karin Dubsky for the Green Party, Charlie Keddy who is an Independent; Johnny Mythen for Sinn Féin; and Melissa O’Neill for the Irish Freedom Party.

Thanks to the election of high-profile TD Clare Daly to the European Parliament, 12 candidates have entered the race to nab her Dáil seat.

The immediate front-runner was Fianna Fáil’s Lorraine Clifford-Lee, who has served as a senator since 2016. A number of weeks into the campaign, however, a series of tweets emerged which she had written years ago on her own account.

The tweets included one in July 2011 in which Clifford-Lee said: “Just doing up inventory of items in my car when it was stolen by some knacker. I think I am going to cry.”

In another, dated June 2011, she described some clothes as being “like something from a Traveller wedding”.

In another tweet, written in October 2011, she wrote she “was on #dublinbus for the 1st time in about a yr yesterday. Forgotten how much fun it is. A black Brazilian dwarf with Ginger hair sat beside me.”

Clifford-Lee apologised for the messages and for any offence caused. Fingal is the youngest constituency in the country, and the fastest growing, with a major issue on the doorsteps being a demand for services.

Fine Gael are running former minister for health James Reilly, who has made a new 40-bed day hospital in Swords, with eight operating theatres, a central plank of his campaign. Sinn Féin are running Ann Groves but the party faces an uphill battle following a series of polls which showed a drop in party support.

The Green Party believes that their candidate, Joe O’Brien, may pip the rest to the post and reports from the ground indicate that Labour’s Duncan Smith will also put in a strong performance too.

Fine Gael will be defending their seat in this constituency after the election of former tánaiste and minister for justice Frances Fitzgerald to the European Parliament last May.

Cllr Emer Higgins is one of 13 candidates in the race and is believed to be the front-runner former alongside former Green Party TD and now Independent Councillor Paul Gogarty and Sinn Féin councillor Mark Ward.

Gogarty’s campaign literature describes him as a “strong Independent who works with others” who has the “best green record of any candidate” in the byelection. He is hoping that voters over 30 remember his time with the Green Party, while Ms Higgins believes that the constituency is ready for a new face.

Cllr Mark Ward is focusing his campaign on the housing crisis.

The Fianna Fáil standard bearer is Cllr Shane Moynihan, but given he secured less than half of Ward’s vote in the local elections, he faces a struggle.

Both Varadkar and Fianna Fáil leader Micheál Martin will be carefully watching events in Cork North Central this weekend.

The seat which is up for grabs was vacated by Fianna Fáil’s Billy Kelleher upon his election to the European Parliament earlier this year. The party is therefore anxious to retain its seat and is running county councillor Pádraig O’Sullivan from Glanmire. Although O’Sullivan hit the ground running from an early stage, he faces competition from Fine Gael senator Colm Burke.

O’Sullivan may face an uphill battle in urban areas, while Burke will be hoping that voters remember his time as an MEP and his time as city councillor from 1999 to 2007.

Of the other candidates, Cllr Thomas Gould of Sinn Féin looks best-placed. He has made the housing issue front and centre in his campaign to date, something which is sure to resonate with voters in Cork. The main issues on this constituency are infrastructural and the need for progress on the long-awaited Northern Ring Road, the M20 Cork-Limerick motorway and a new hospital for the northside.