How much? Sorry, how much? Also, why? And how? 8 questions to answer in the printer saga 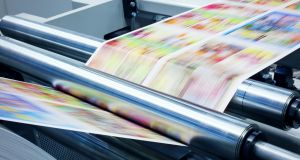 On average the Oireachtas printers do 2,357 jobs every year. Photograph iStock.

Walk past Leinster House on a Thursday afternoon and you’ll often see TDs piling boxes into their car boots. The boxes are heavy, and there’s a lot of them, though Oireachtas staff are often on hand to help.

The printers used to be employees of the parties, but now they’re public servants. Expenditure is between €550-600,000 a year. In addition to that, staff costs - covering one manager and eight staff - were about €610,000 last year.

In 2017, the Oireachtas authorities approved a proposal to upgrade the facilities. A report by the Clerk of the Dáil Peter Finnegan says the two existing machines were “costly to maintain” and over 12 years old - though the business case presented for the new investment reckoned they could be sold for €100,000. They would cost €170,000 to overhaul. A new machine was expected to cost €800,000. The project was given the go-ahead.

When the tender was published, however, it wasn’t just for one €800,000 machine - it was for five separate machines, including a plate making device, a folding machine, guillotines and a “pile turner”. The total cost of all these machines would be €1,369,605. The €800,000 would only get you the printing press.

During the tendering process, the company that would supply the printer, Komori, pointed out an issue with the height of the room. Potential tenderers had visited the site, and Komori wondered if a false ceiling could be removed to provide adequate height. Yes, the Oireachtas replied - another 35cm could be added. Komori sent a number of documents, including a drawing, pointing out that the recommended ceiling height to house the printer was 3.16m.

So what happened to that? Why didn’t the Oireachtas realise that this would require works? The report doesn’t tell us.

Instead, it says: “at the time of writing this report I have yet to establish how or if this information was processed within the Houses of the Oireachtas Service.” They went ahead and signed the contract. The subsequent works cost about €229,000 excluding Vat.

At the same time the Office of Public Works took the opportunity to carry out other works to the building, including on the air conditioning. That cost an additional €195,000. All in, the cost to the state of purchasing and installing the printer, and the associated works, is around €1.8 million.

Thursday morning’s report to the Public Accounts Committee acknowledges the error - but attributes no responsibility for it.

“Having reviewed the documents,” Mr Finnegan wrote, “I am of the view that the emphasis during the procurement process was on acquiring a printing press that had a high degree of functionality, was cost effective and would fit into the Print Facility with an acceptable surrounding work area.

“However, the requirements of the building and other regulations in relation to ‘head height’ were neither understood nor examined during the critical early stages of the project. A project of this scale and complexity requires specialist expertise (particularly architectural and engineering) on the project team at all stages and this must be a consideration in all future projects.”

However, the saga begs a number of continuing questions. Here are eight:

Firstly, was a new printer really necessary? The report outlines only that the existing presses were old and costly to maintain. But nowhere does it say they were incapable of meeting the needs of the Oireachtas. In fact, they seem to have been performing it admirably in recent years.

Why did the project team - comprising the head of Oireachtas Communications Derek Dignam, head of printing Riche Roe and other senior staff assisting in the tender process - not call a halt when the supplier of the printer told them it required a height taller than the room?

Why hasn’t the Clerk of the Dáil been able to get to the bottom of this?

Why is it yet another case of a State body identifying errors, but not identifying responsibility for them?

Why is the printer not working yet?

What are the nature of the “health and safety assessments” that have to be carried out in the switch from the old printers to the new one?

Exactly how much are the Siptu workers looking for?

And finally, is there any other way - as yet unrevealed - in which the taxpayer is being shaken down in this sorry saga?

Reading the report for the Public Accounts Committee, one wouldn’t exactly rule it out.