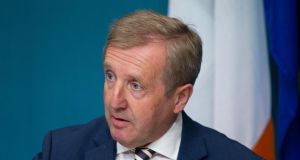 Minister for Agriculture Michael Creed told the Dáil that difficulties surrounding the beef crisis had been compounded by the death threats. Photograph: Tom Honan

Death threats have been received by senior management in a meat company where an injunction against blockading farmers is still in place, Minister for Agriculture Michael Creed has told the Dáil.

As hundreds of independent farmers, many driving tractors, protested in Dublin city centre over the price they receive for cattle, Mr Creed said that the difficulties in establishing a taskforce to deal with the beef crisis had been compounded by the death threats.

The protests follow blockades at beef processing factories over two months this summer and farmers protesting outside the Dáil. TDs supporting them called for independent and non-aligned farmers to be recognised and represented at the taskforce.

The taskforce was promised as part of an agreement to end the protests.

But the Minister said TDs were well aware of the specific issues involved in the convening of the group, as farmers called for remaining injunctions to be lifted against farmers who picketed outside processing plants.

He said the injunctions that remained were granted to a company that is not part of the taskforce.

“What has compounded the difficulty is that senior management in that company have had death threats issued to them. And their partners and families have been intimidated in that local community.”

As a number of TDs expressed their support for the protesting farmers, Mr Creed said “we are grappling with very difficult issues”.

But a row erupted when the Minister said that Independent TD Mattie McGrath was “shrugging his shoulders” and might “dismiss the difficulty of death threats but the Government doesn’t and the gardaí don’t”.

Mr McGrath said he accepted that threats had been made and that the Government was taking them seriously and called on the Minister to withdraw his remarks.

Mr Creed said previous experience had shown what followed from death threats and they were taking them very seriously.

Mr McGrath said the farmers outside the gate were non-political and they were worried about the perilous situation they faced. He had called on the Minister to meet them and to accept a letter from them because the “taskforce isn’t doing the job, won’t do the job and it’s not business as usual”.

The Tipperary TD also said he appreciated the support from Dublin-based People Before Profit Bríd Smith who raised the issue.

Ms Smith said there had been eight weeks of blockading of meat production plants and farmers were back to ask for the issues to be dealt with urgently. She called on the Government to be inclusive of all farmer representative groups, and the Independent Farmers of Ireland who have re-grouped and have demanded the lifting of all injunctions so that meaningful talks can take place.

Fianna Fáil Cavan-Monaghan TD Niamh Smyth claimed the Minister had not delivered on his commitment two months ago when farmers ended their protests to deliver on a taskforce.

Minister for Justice Charlie Flanagan was heckled by the Opposition when he said “soundbites” were not the way to deal with the issue as more TDs spoke about the farmers.

Mr Creed insisted that progress had been made and he listed a “whole host” of support schemes including an additional €120 million to support farm incomes this year.

He highlighted the threats to senior management but also said that there had been bilateral engagements between the chairman and all the constituent members of the taskforce and progress had been made.

Agreement had been reached to commission studies and arrangements on unfair trading practice with the idea of a regulator for the sector.