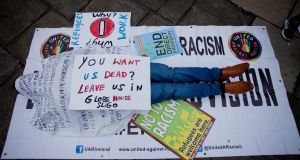 A protester attends a demonstration calling for the end of the direct provision system in Dublin in 2017. Photograph: Tom Honan.

The Ombudsman Peter Tyndall has said a lot of concerns raised about direct provision centres prior to their opening have not transpired and they are operating in “a reasonably settled way”.

Mr Tyndall said he had recently visited some of the centres “which have been the subject of controversy prior to their opening”, including ones in Lisdoonvarna and Wicklow town.

“It’s important to note in the context of the current controversy that a lot of the supposed outcomes of opening a centre - in terms of integration of residents and community, and the attitudes of communities - have not transpired and those centres operate, it seems to me, in a reasonably settled way,” he said.

Mr Tyndall was before the Oireachtas Committee on Justice and Equality to discuss direct provision on Wednesday. He said the issue of populism and antipathy towards asylum seekers and immigrants is affecting public discourse across Europe.

“It’s not an Irish issue..I’m very reluctant normally to speak beyond the casebook but the reality is that we as a country need to be properly providing for people who come to us as asylum seekers and refugees and as a country we need to find ways of welcoming them and integrating them,” Mr Tyndall said.

Protests have taken place recently in the Galway town of Oughterard over concerns about the Connemara Gateway Hotel becoming a direct provision centre.

Independent TD Catherine Connolly said it would help if there was “better communication” with local residents about plans for the community.

“When a vacuum is created and when information isn’t forthcoming to a local community, comments are made by a small group of people, so there is a role for us as politicians, for your office and there is certainly a role for the Government and Department of Justice in relation to that,” the Galway West TD said.

Mr Tyndall said his office carries out announced visits to direct provision centres to talk directly to the residents about the issues affecting them.

“As short-term provision, direct provision is fine. It’s not ideal, but if people are coming into the country and need somewhere to stay briefly while their needs are being accessed, then it functions reasonably well in that capacity. The difficulty arises with the length of time people are having to spend in direct provision,” he said.

“There are large numbers of people within the system who have the right to remain in Ireland but who are unable to satisfy their housing needs. That in turn has meant that many more people are in emergency accommodation.”

The committee heard there are about 1,400 asylum seekers living in emergency accommodation and the figure is rising. Separately, about 900 people who have received refugee status remain in direct provision because they are unable to secure somewhere to stay.

Mr Tyndall said there needs to be a resettlement programme which would adopt a “systematic approach” to help find accommodation for those who have received refugee status and asylum seekers who have secured the right to work.

A number of TDs asked would it be possible for the Ombudsman to carry out unannounced visits to direct provision centres or speak to residents away from the centre.

Independent Senator Frances Black said residents may be “afraid” and “terrified to engage” with the Ombudsman onsite as they fear they would be “targeted as a troublemaker”.

Mr Tyndall said his office makes arrangements to meet residents offsite when they are reluctant to speak and he would give unannounced visits “serious consideration”.

The Ombudsman also said he wants increased powers to inspect the processing of asylum applications.