Garda to send armed support to Cavan after Lunney attack 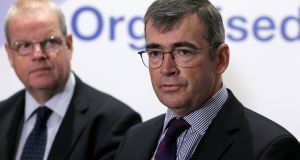 Definite lines of enquiry are being pursued in the investigation into the abduction and attack on Fermanagh businessman Kevin Lunney, the Garda Commissioner has said.

Drew Harris said the investigation was “progressing”, but said he believed there was “more out there we can know” and appealed to the public again to come forward with information.

He also said that from Monday a Garda armed support unit would be based in Cavan.

Kevin Lunney, a senior executive with Quinn Industrial Holdings (QIH) in Derrylin, Co Fermanagh, was snatched from his car as he returned home on September 17th. He was held captive, tortured and brutally beaten before being dumped by the side of the road in Cornafean, Co Cavan, more than two hours later.

According to Garda sources, the gang suspected of his abduction is criminal rather than paramilitary, and has members on both sides of the Border and a significant presence in Dublin.

Gardaí believe that, under the stewardship of a middle-aged man from Leinster, the group has effectively waged a war against Irish and foreign business interests who bought parts of Seán Quinn’s former empire.

Minister for Justice Charlie Flanagan visited the offices of QIH in Derrylin, Co Fermanagh, on Wednesday morning. He met executives and directors, and briefed them on the investigation.

Gardaí on Wednesday issued a specific appeal in connection with what has been described as a white “hi-roof” transit-type van.

“This van is in poor repair and may have a loose screeching fan belt,” a Garda spokesman said, and had a “distinctive painted red floor or partially red floor in the rear cargo area”.

The Taoiseach called on Facebook to reconsider its community standards after it emerged that QIH has contacted the Garda and PSNI with a formal request to obtain data in connection with Facebook pages which published material about the company’s executives.

“I really think that Facebook needs to rethink its standards in that regard in the light of these events,” Leo Varadkar said.

He said the Government was “very much focused on securing arrests and securing convictions and bringing people to justice,” and said about 150 extra gardaí had been assigned to the Northern region in the past two years.

Speaking to reporters during a cross-border conference on organised crime, which was held in Ballyconnell, Co Cavan on Wednesday, Garda Commissioner Drew Harris rejected the suggestion police had “failed” Mr Lunney, his family and his colleagues by failing to secure prosecutions against those involved in previous incidents of intimidation.

“I do not accept the proposition in any respect,” he said, and added that arrests had been made and files sent to the DPP. The investigation into these incidents, he said, was “ongoing” and An Garda Síochána was “committed to resourcing Cavan and Monaghan”.

He said a specific operation had been in place, in conjunction with the PSNI, to investigate the intimidation of and attacks against QIH management, and there was “a single point of contact for QUI in terms of concerns that individuals may have had in respect of threats to them or attacks”.

He said: “Obviously people are scared and worried but even with that background we have a good relationship with the community.

“This will stand us in good stead in terms of receiving information.

“It think there’s more out there that we can know, and again I would ask the public to come forward with whatever information they might have.

“We are here as the forces of law and order.”

Law and order “will prevail”, he added, “and free the community from the fear of this particular group”.

Mr Harris refused to be drawn on the makeup of the group, and said only that he would not “add to that speculation other than to say they are vicious individuals based on the nature of the attack.

“They had some degree of organisation, there is no doubt of that,” he said. “They will hopefully stand and face charges in respect of this despicable attack.”

Speaking alongside the Garda Commissioner, the PSNI chief constable Simon Byrne said 190 police officers were being put into Border areas “to raise our levels of visibility and reassurance”.

“This particular escalation of violence came out of nowhere,” he said. “Self-evidently there has been an awful attack on an individual and it is too early yet for the hindsight test to see what could have been done differently in terms of the nature of the threat we thought we were dealing with at the time.”

Mr Flanagan told reporters that he acknowledged there had been “a history of intimidation” on the area, and said investigations were ongoing and arrests have been made.

“Nobody in our community is above the law,” he said, “and what we are seeing now is an intensified investigation for and on behalf of An Garda Síochána here in Cavan and also on the part of the PSNI.

“No stone will be left unturned to bring these people to justice,” he said.