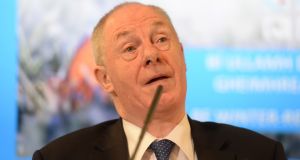 Michael Ring: ‘Whoever comes into government, I will see it as a slight on rural Ireland if the Department of Rural and Community Development is not left there.’ Photograph: Dara Mac Donaill

The last few months have been tough on Michael Ring. So many removals and Masses he has been unable to attend. So many hands not shaken, so many sympathies left unsaid.

The consummate constituency man has been furloughed from funerals by Covid-19 and he’s not himself.

The TD for Mayo and Minister for Rural and Community Development came to the Dáil on Wednesday afternoon to make a statement on his department’s handling of the crisis and answer questions about it. As the session progressed, it began to feel like the Dáil’s most celebrated send-off specialist (for there are many) was presiding at the obsequies for his own ministerial job and beloved Government department.

He recalled the new department’s difficult birth. Some TDs tried to stop it but he managed to deliver the Bill establishing it at a Dáil sitting which ran close to its midnight deadline.

And now, three years on?

There is talk of a shake-up of departments after the new government is formed with Ringo’s pride and joy figuring among those mentioned as suitable for integration with other ministries. And there has also been talk that he won’t be included in a much reduced Fine Gael coalition cabinet team. This was clearly playing on his mind.

During an uncharacteristically subdued performance, the Minister became animated when strongly hinting he will not be back in any new administration.

“I want to put this on the record – and I shouldn’t, but I will. Whoever comes into government, I will see it as a slight on rural Ireland if the Department of Rural and Community Development is not left there. And I don’t care who goes into government, that department has to be left there,” he passionately declared.

Add to that the sudden, cruel removal of his long-established right to roam the parishes of Mayo condoling with constituents in a manner perfected over the years and you can see why the normally ebullient Ringo was a bit out of sorts.

There was a valedictory sense to the proceedings. While ministers always go over the top lauding the wonderful works wrought by their special corner of government, Michael’s opening contribution had a touch of eulogy about it.

He managed to mention “my department” 16 times. It sounded like he was trying to send a last-ditch message to save the department he brought into the world while laying claim to be the person best qualified to run it.

From the beginning of the crisis, his department has played a central role in mitigating the Covid-19 threat and before that it was chalking up countless achievements in rural communities and disbursing bucketloads of funds around every far-flung corner and up every boreen, he modestly pointed out in great detail.

And the TDs present were generous and sincere in acknowledging the work he has done and thanking him for it.

With an eye to the particular needs of people living in rural areas, the Minister has been critical of the strict travel limits imposed during the lockdown. There are reports of tension within Cabinet between Ministers who want the restrictions eased (Ring firmly in that camp) and those who want to stick with the expert advice.

He took the opportunity to publicly express those views when Labour’s Sean Sherlock said the restrictions were unfair to rural communities.

“I can’t disagree with you . . .There is a difference between 5km in an urban area and a rural area.” That statement shouldn’t have made sense, except it did. People in urban Ireland don’t have to go very far to access services and amenities, but it’s a different story for those living in less densely populated areas of the country.

But then “lookit” sighed the funereally deprived TD, the whole lockdown has been very hard going.

“There is no point in pretending and I don’t mind saying it in this Dáil myself today that I found it difficult myself, when you’re, you know . . .” He gathered himself.

“What I miss most is actually meeting people, talking to people. And it’s, it’s very difficult when you’re all your life . . .” he looked up sadly towards fellow flesh-presser Bernard Durkan, who was in the chair. “Sorry, you know that Cathaoirleach, as somebody that’s going around talking to people, meeting people and the next thing, all of a sudden, that all stops.”

You had to feel for him.

Michael’s mood wasn’t helped by negative comments from some TDs. He pointed across to Sinn Féin’s Pauline Tully.

“And I heard you criticising the funding that Cavan got. Well Cavan got more funding from the last government, and I’ll put it on the record now . . . Go back and check the record,” he told her.

“You’ve got substantial funding in the towns and villages, I remember off the top of me head, and I wasn’t expecting to get parochial today but because you raised it, I will.”

Thanks to colleagues Frankie Feighan and Peter Burke, who obligingly kept their questions very short and glowingly complimentary, Ringo was allowed more time to talk about his department.

He was delighted to hear some positive comments for a change. “It does annoy me sometimes when I hear people knocking rural Ireland,” he sighed, also expressing his irritation with those who are “not truthful” about the government funding they receive for their communities.

And to think his bailiwick might be at risk. “Let nobody tell me that rural Ireland isn’t a better place since this department was set up,” quivered the Mouth of Mayo. It has done a “tremendous job” in all sorts of areas, including “the broadband”.

It’s been success all the way. “There’s more people working and living in rural Ireland now then there ever has been since the foundation of the State. Not me saying it, not the Government saying it, that’s the CSO figures.”

Ringo’s operation is so good that other departments offload difficult issues on to Community and Rural Development. “I don’t mind them throwing over the issues, but they never throw over the funding,” sniffed the Minister, feeling a bit sorry for himself and his predicament.

Michael Healy-Rae was very supportive, thanking him for his particular interest in local improvement schemes. “You delivered every penny that you could, you certainly weren’t found wanting when it came to County Kerry.”

At this rate we’ll have to set up a petition to have Michael Ring returned to cabinet.

“I’d love to be here myself,” he said, hopefully.