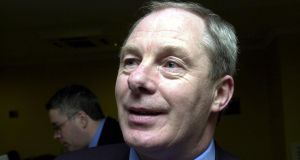 Minister for Rural and Community Development Michael Ring told the Dáil there is a difference between 5km in an urban and rural area. Photograph: Cyril Byrne

Minister for Rural and Community Development Michael Ring has called for a tweaking of the Covid-19 regulations to allow people in rural areas travel further from home than those in urban areas.

Mr Ring told the Dáil there is a difference between 5km in an urban and rural area.

He also called on the Bank of Ireland to ensure that all of the branches it closed during the coronavirus crisis are “re-opened immediately”.

Mr Ring condemned banks and public services which attempted to use the Covid-19 pandemic as an excuse to shut down or restrict services.

The Government meets on Thursday to decide on further easing of restrictions next week including extending to 20km the distance people are allowed to travel from their home.

Mr Ring said he had raised the issue in Cabinet and “there is a difference between 5 km in an urban area and a rural area”.

He said “even walking 3km or 5km is not simple and it is something the Government is looking at”.

“I hope that now that we’re coming into phase two of the lockdown that we’ll see changes,” he said.

The Minister said the lockdown had been hard on people particularly those who had been cocooning and unable to leave their homes.

Mr Ring was responding to a number of rural-based TDs who expressed concern about the impact of the distance restrictions on their communities.

Fianna Fáil deputy leader Dara Calleary said 20km did not bring anyone far in Mayo and he called for “some sort of flexibility to be given for inter-county travel and travel within counties”.

His party colleague Aindrias Moynihan said that a person could travel in Dublin for up to 20 km and “engage with anything up to one million people, thus potentially driving on Covid-19 at a super-spreader rate”.

But he said “in a rural community if you travel 20km, you might not meet anything more than a handful of people.

“In terms of people being able to drive around and do their business in rural communities, the limits are very restrictive.”

East Cork Labour TD Sean Sherlock said “grandparents are not able to see their grandchildren at the moment by dint of the fact that they live more than 5 km away. There is an inequity there. It is unfair.”

Earlier the Minister called for Bank of Ireland to re-open all branches it closed during the pandemic and said that “if the business existed prior to the crisis, it should be there after it”.

He was responding to Mr Calleary who said he suspected that “many private companies are making plans to take services out of rural Ireland and use Covid as a cover to do that”, particularly banks.

He asked if Mr Ring had taken a stand against banks using Covid as a cover to close branches.

“That is a disgraceful way to treat rural Ireland, given that it helped pay the bills that those banks left behind. We need to make it very clear today, across this House, that we will not stand for withdrawal of any services from rural Ireland using Covid-19 as a cover.”