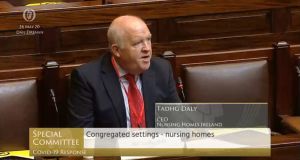 Tadhg Daly of Nursing Homes Ireland warned about ‘cataclysmic consequences’ because of delays in testing for staff and residents. Photograph: Oireachtas TV/PA Wire

The Department of Health was warned by the health regulator of more than 200 “high risk” nursing homes before there was a surge in outbreaks at care facilities during the Covid-19 pandemic, it has emerged.

The Health Information and Quality Authority received “just an acknowledgement” from the Department after sending the list and “no response” to concerns it had previously raised about the lack of clinical oversight in the sector, officials told a Dáil committee hearing yesterday.

Hiqa inspectors have not visited any of the approximately 250 nursing homes where outbreaks of coronavirus have occurred, officials also told the Special committee on Covid-19, though “risk-based assessments” are due to start shortly.

Nursing homes have been particularly badly hit by coronavirus, accounting for 884 or almost 55 per cent of the 1,615 Covid-19 deaths in the State.

It has also emerged that nursing homes repeatedly sought help from the Government and health service as the pandemic took hold.

New documents have revealed how Nursing Homes Ireland sought “urgent” guidance for the sector from late February and told senior officials of difficulties accessing personal protective equipment. The group repeatedly sought representation on the public health emergency team and raised concerns about discharges from hospitals into private and voluntary homes.

The group pleaded with the Minister for Health Simon Harris and his officials not to recruit staff from the sector warning that such a move would endanger older people. Head of the group Tadhg Daly also warned about “cataclysmic consequences” because of delays in testing for staff and residents.

As the Covid-19 crisis deepened in the sector, some nursing homes reported that they were forced to use painters’ overalls and supplies from local schools and vets as personal protective equipment and endured delays of weeks in trying to get residents and staff tested for coronavirus.

At a meeting of the Covid-19 committee yesterday, Fianna Fáil TD Stephen Donnelly said the unfolding crisis in nursing homes was not discussed by the National Public Health Emergency Team until its 12th meeting, on March 10th.

“It seems clear given the scale of clusters, outbreaks and fatalities in nursing homes that opportunities were missed to support the nursing homes and prevent contagion into them.

“I believe one of the reasons is that nursing homes and older people have had no voice in the room where the decisions are being taken, which is the NPHET.”

The committee, which is examining the State’s response to the pandemic, also heard Fianna Fáil TD John McGuinness describe as a “huge scandal” what had happened in nursing homes during the pandemic and suggest a general inquiry was needed.

Asked about the State’s response to the nursing home sector and whether it was left “isolated”, as claimed by Nursing Homes Ireland, Chief Medical Officer Dr Tony Holohan said last night that in general there was very early and significant action taken compared with other countries.

“A public health-led response ... in the first instance had to focus on dealing with community transmission of this virus. There was simply no way of protecting nursing homes or any other institutional setting if we don’t control the spread of this infection in the community.”

Dr Holohan is due to brief Ministers on Wednesday on the current public health advice on 2m social-distancing rule, which some Cabinet Ministers last week suggested should be reduced to 1m.