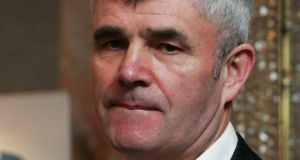 Pádraig Ó Céidigh: said new model could be operated through An Post or through credit union offices. Photograph: Cyril Byrne

A new State bank with branches in post offices and offering low interest rates needs to established urgently to prevent thousands of small companies being wiped out by the coronavirus pandemic, a businessman and former senator has said.

Pádraig Ó Céidigh wrote to Minister for Finance Pascal Donohoe and Fianna Fáil finance spokesman Michael McGrath arguing a State-owned bank should be included in the programme for government.

Mr Ó Céidigh, a member of the last Seanad, has said many of the country’s small businesses will not be able to access credit from the five pillar banks to allow them survive the imminent recession, because they will seek onerous personal guarantees that would include liens on homes.

He said community, or second-tier, banks have been established for decades in countries like Germany and New Zealand. He said the Sparkassen bank model in Germany was able to offer business customers low interest rates (below 2 per cent) because it had access to the European Central Bank. That compares with rates of more than 5.5-6 per cent being charged by pillar banks.

Such banks, he said, did not rely on personal guarantees but on continuing relations with its customers in the community.

In his letter, Mr Ó Céidigh said many of the 250,000 SMEs operating in Ireland, employing about 1.2 million people, were now facing formidable challenges in order to survive.

“They were the backbone of communities both urban and rural. Now, according to many estimates, less than half are active in business, and, unfortunately, many may not survive the current Covid crisis,” he said.

He said these business did not want a handout, but “a fair opportunity” to keep their businesses alive

“According to the OECD the German public banking system has a 40 per cent share in total banking in that country.”

He said Niclaus Bergmann, international chief executive of the Sparkasse bank, told an Oireachtas committee in 2017 that German SMEs in the system paid an average 2 per cent interest on loans for a term of 10-20 years. Those loans were also fully guaranteed by the State.

“Mr Bergmann also indicated that the level of bad debts is very low,” he said.

“In Ireland, SME’s typically pay between 5.5 per cent to 6 per cent annual interest, with personal guarantees and onerous covenants with a full review after five years.”

He said the model could be operated through An Post or through credit union offices.

In 2011 the Labour Party argued for the creation of a new State bank but it did not materialise. Instead there was a strategic investment fund, and another organisation that provides microfinance to small companies. Mr Ó Céidigh has said both bodies could be subsumed into a new State bank.

Mr Donohoe replied to the former Senator saying that a 2018 report on local public banking concluded there was no business case for such a model in Ireland.