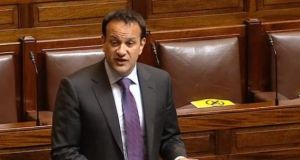 The co-leader of the Social Democrats was taking a dim view. She addressed Leo Varadkar on his first day back after his Topless Taoiseach Picnic Shame in the Phoenix Park.

“Taoiseach, I find this really abnormal and I think it’s a very bad look,” tut-tutted Catherine Murphy, seemingly dispensing a dressing down to the image-conscious Fine Gael leader.

An unexpected intervention, given she spent many years working in Leinster House with Mick Wallace and never commented adversely on his fashion sense. But she may as well have been talking to the wall for all the notice the Taoiseach was taking.

Leo Varadkar gazed blankly into the distance, elbows on the table, nonchalantly popping bits of food into his mouth like he was having another picnic, this time all on his own with nobody watching.

Hang on though. Catherine really WAS talking to the wall, the one above the Ceann Comhairle which is draped in heavily pleated gold curtains and has two large LED screens mounted at either end. And she was trying to converse with a Taoiseach now trapped in the Zoom session from hell and answering TDs remotely from an empty committee room in an adjacent building.

So the deputy for Kildare North wasn’t attacking him over his sun-soaked insouciance at the weekend. Instead, she was bemoaning the strange situation in which the Dáil now finds itself, attempting to conduct sittings with some vague sense of normality but utterly hamstrung by an overzealous approach to best-practice guidelines.

This led to the Taoiseach being shooed away from the chamber by the Ceann Comhairle while his question and answer session was still in full swing because he had spent two hours in situ, thus exhausting his Covid-dictated time window for the Dáil.

A bemused Seán Ó Fearghaíl then had to call for a five-minute break so Varadkar could “relocate” to Committee Room One “where he will be beamed into us”.

Just after two o’clock, the screens came on in the chamber and there was the Taoiseach, sitting in splendid isolation at a desk in a long line of desks in a large, empty room. With his lunch. Not beaming.

You can’t blame Catherine Murphy for having an “aah here” moment when she had to talk to the wall. There has to be a better way, said Catherine to the man staring down from the big gold curtain like he was the Wizard of Oz.

The House should be able to come to political agreement on reworking the extreme social distancing rules spancelling the business of parliament. “I believe this to be a very safe workplace given its size and the amount of cleaning done, which is premium,” she said.

Catherine Connolly from Galway West was in complete accord. “The fact that we are in an empty Dáil chamber and the Taoiseach is ensconced in another room sends the wrong message to the country at a time when we are trying to instill confidence that we are going in the right direction.”

Whatever about the Taoiseach’s reluctance to loosen his adherence to the untypically strict regime, no speaker on the other side disagreed with Connolly’s conclusion that “there is something seriously wrong with the decision and the advice” to conduct Dáil business in such a draconian manner.

But Leo is sticking with whatever NPHET advises. Some people might say it suits the Government to have a situation where the rules of engagement, while appearing to offer transparency and access, mitigate against any serious interrogation of him or his Ministers.

The abandonment of committees compounds this. But don’t blame Merrion Street, he argues. Blame the medics.

The People Before Profit TD is deeply frustrated and he expressed that frustration yet again on Wednesday. He has asked several times to see the advice given by the experts’ experts, known as the Expert Advisory Group, to the experts in the National Public Health Emergency Team.

No problem. On the way. Any day now.

“I got answers. I got commitments. They came to nothing.”

Only last week, he pleaded with the Canonised Medical Officer (CMO) Tony Holohan to have the minutes released. “Yes. I will engage with the chair of the expert advisory group about when the minutes and advice can be provided,” the CMO told the high-profile Covid Committee meeting.

“We have, for the most part, acted on all the advice the expert advisory group has given to NPHET. I see no difficulty in making that available to the Deputy,” said the CMO. Still no sign. “At this point the Dáil and the Business Committee are being treated with contempt by the refusal to publish the minutes,” seethed Boyd Barrett.

The Taoiseach said he would ask the Minister for Health about it. RBB didn’t look thrilled.

The Opposition is suspicious of the apparent lack of enthusiasm for testing the boundaries of advice given by medical experts. The Fianna Fáil leader was struck by last week’s guidance letter from Prof Martin Cormican, upon which the Oireachtas appears to be relying. “It is a masterpiece of writing,” smiled Micheál Martin. He particularly liked the bit where “he reminded us he had always understood that it was we who set the rules for him, rather than he setting the rules for us.”

Labour’s Alan Kelly agreed the measures are over the top. “I know we say the advice is that every workplace is different, but I mean, look at the size of this place,” he cried, gazing around the yarning gaps and empty rows under the high domed ceiling. “This is ridiculous.”

Sinn Féin’s Mary Lou McDonald backed him up, concerned that the measures are being used by Ministers to minimise appearances and dodge scrutiny. “We have here the benefit of great ventilation for all the hot air.”

Never mind. We mightn’t be able to see or hear many TDs in their natural habitat because of the emergency, but at least we can now hear the dawn chorus and see foxes at dusk, smiled the Taoiseach. Which is nice.