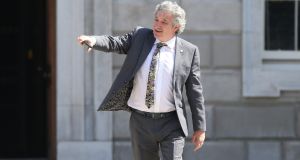 John Halligan cheered the incarcerated unfortunates in Leinster House on the hottest day of the year with radio comments about political collegiality and government formation. Photograph: Nick Bradshaw

It seems everyone was in agreement with the Minister, which is unusual in Leinster House.

But nobody wanted to admit it in public, which is not unusual in Leinster House.

“Wonderful, a politician telling the truth!” laughed a cynical staffer, beaten down by years of having to listen to bombast and waffle. “Never said a truer word.”

This praise was not directed at either of the two Ministers who reported for duty for a day of statements and questions on revised estimates for the Social Protection Budget. It was mainly statements and very little questions followed by complaints from the verbose that their questions weren’t being answered.

The Ceann Comhairle kept trying to remind them their slots are strictly time-limited and if they rabbit on for too long, they leave no time for the Minister to answer. It made little difference, they can’t help themselves.

The session was flagged by the Taoiseach on Wednesday as a run-of-the-mill vote to ensure the continuation of existing Covid-19 payments after June 8th by approving supplementary funds for the Department of Social Protection. As for how long they will continue, that’s a separate but serious bone of contention.

“I don’t understand why it will take six hours given that it is a straightforward, no-policy change, Supplementary Estimate,” he told the Dáil.

If Leo Varadkar didn’t understand that then he doesn’t understand his fellow politicians, who operate by their own variation of Parkinson’s Law – Talk (instead of work) expands to fill the time available to do it.

The sitting was broken into three slabs of two-hour sessions, with Minister for Social Protection Regina Doherty appearing first and last, and Minister for Finance Paschal Donohoe piggy in the middle.

But neither of them was the Minister fielding friendly greetings of “Fair play to ya!” in the corridors on Thursday afternoon.

That was John Halligan, recently retired TD and reluctant Minister still doing his departmental duties, who cheered the incarcerated unfortunates in Leinster House on the hottest day of the year with radio comments about political collegiality and government formation.

Back in Kildare Street, people silently cheered, and deputies from the two bigger parties laughed when asked about Halligan’s assessment. None disputed it. “Nail. Head. Bang,” smirked one.

But anything is possible when power is up for grabs, John.

Mutual dislike and suspicion is no bar to unlikely political union.

Away from the chamber, members of the negotiating teams from the putative government partners flitted in and out, carrying armloads of files and sustenance from the small pop-up takeaway cafe operating in the Oireachtas canteen.

Cards are being played very close to chests. Leaking is not happening with the sort of regularity or volume normally enjoyed by attending journalists.

How are things progressing? “Constructive and ongoing.” “Ongoing and constructive.”

Time is beginning to drag.

At least there were a lot of exciting entries in the very competitive Most Overgrown Hairstyle of the Day competition.

Fianna Fáil’s deputy leader, Dara Calleary, walked away with the honours for his expanding cushion of curls. Such well-defined curls too. He was getting lots of compliments.

'We need to get you a little closer to the microphone, Minister,' he told her in a sentence never before spoken to a Minister

“I put gel in it this morning,” he sheepishly confessed. “I had to. Somebody told me yesterday I looked like Bernard Durkan.”

There was a brief frisson of excitement amid fears Regina Doherty was lost in the space-time continuum while being teleported from the Dáil chamber to a committee room in the basement of the adjoining Leinster House 2000 building. This had to happen because she used up her allotted two hours in the chamber and was barred from entering it for the rest of the day.

The Covid rules in the Dáil are on a different level from the ones governing ordinary folk. If somebody were to make a television programme about practising their restrictive regime it would be called “Extreme Distancing” and feature scarily needy people willing to do anything to get on telly.

But Regina finally swam into view on the two big screens above the Ceann Comhairle’s head. “We need to get you a little closer to the microphone, Minister,” he told her in a sentence never before spoken to a government minister, or politician of any stripe for that matter.

The Minister, who lost her seat in the election but, as in the case of John Halligan, is constitutionally obliged to continue in office, was informed by a number of Opposition TDs that they didn’t think it right that an unelected individual should be making policy decisions or addressing them in their hallowed forum. She told them in no uncertain terms she is acting in accordance with the Constitution and will do her job to the best of her ability for as long as required.

Áontu’s Peadar Tóibín was one of them. It was nothing personal, he said, before declaring the Dáil had turned into “a democratic twilight zone”.

Sinn Féin’s Dessie Ellis was fuming. “With a caretaker government behaving in an almost cavalier manner and with unelected individuals holding ministerial positions making decisions for us with a minimum of scrutiny and accountability, how can we expect anything but more of the same?” he thundered in a slightly confused manner, roaring at the rows of vacant Fine Gael seats before remembering to look up and roar at the woman smiling down at him from high on the back wall of the chamber.

Independent TD Catherine Murphy has been struggling with the over-the-top operational changes.

“This is the third time this week I find myself talking to a very nice set of curtains and a couple of television screens and it doesn’t feel any better the more I do it,” she sighed before asking about housing assistance payments and maternity benefit.

“I agree that this set-up is weird, but life is a bit weird at the moment. I would be grateful if this were the least of our worries,” replied the Cabinet Minister who isn’t a TD to a sitting of the Dáil while sitting on her own in a room far away.

“Minister, you look like you’re about to deliver the votes of the Swedish jury at the Eurovision,” said Labour’s Ged Nash, acknowledging the somewhat surreal nature of the proceedings. “So I hope that Louth gets douze points.”